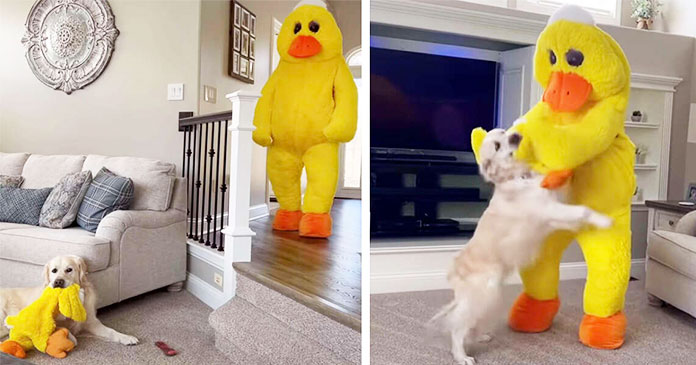 Dogs too are very particular regarding the toys. Mostly they chose the toys that either taste like food or can be torn apart. They have their favourite toys. Like Charlie who is a very sweet pup and he has a liking for his stuffed duck. It is not like he has only one toy to play with, he has plenty of other toys.

But if we talk about his favourite then no one can take the place of the plush duck named Mr Quackers with whom he spent his time with. According to Alicia, Charlie’s owner, she noticed that he would take it wherever he went and even slept with it at night. That was the first time the dog was acting that way with a stuffed toy. 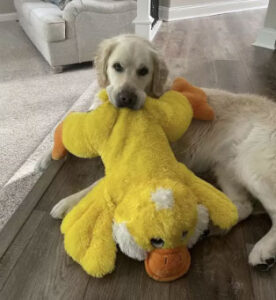 Both of them were inseparable. Seeing the special bond that the dog had with the stuffed toy, made Alicia and her husband plan a special surprise for him. They thought of arranging a visit from an oversized and fully animated version of Mr Quackers.

It was by chance that Alicia’s husband got a perfect Mr Quacker costume at the store and he played the part of Mr Quacker. When Charlie saw his stuffed toy coming to life, he was on cloud nine. According to Alicia, when Charlie saw the life-size Mr Quackers, his tail started wagging fast and his entire body was moving.

It was a memorable moment. It is really sweet on the part of his parents to go over and beyond for their sweet little dog. The dog would have remained content with his favourite toy but the parents wanted to give him real happiness.