There are different ways in which a dog try to communicate with humans. The way they behave depends on whether they are hungry, angry, happy or hurt and their barking also changes in that way.

A group of people working near the town of Suwalki, Poland, heard the crying of a dog in a remote wooden area. The barking of the dog was so continuous that they decided to investigate. It was a good thing that they followed the sound and we are thankful for that….

When they reached the spot from where the sound of the crying dog was coming, they were motionless by what they saw. They saw a dog lying in a pool of tar and he was stuck in it that he could not escape. The workers stopped their work and they contacted Joanna Godlewska of the Niczyje Animal Foundation. When she got a call, she rushed to the scene and she was really worried about it.

According to Godlewska, when she finally arrived, she saw a dog lying in the tar and she was unable to control the tears in her eyes. It seemed that a dog might have sat on the tar to seek warmth but he was not having any idea that he would get stuck there.

It was not clear how long the dog had been stuck there but one thing was clear that he wouldn’t have made it on his own. He was completely exhausted when he was discovered and if his crying was not heard by the workers he would surely have died. Godlewska and her team were able to set the dog free from the tar first by cutting away portions of his fur and then by using cooking oil to loosen the rest.

The dog was then taken to the veterinary for the treatment of exhaustion. Rest of the tar was scrubbed from his body and after some examination it was found that a dog was in a good health. The dog is named Farcik and he is surrounded by the people who love him.

Good luck Farcik! You will finally get a loving home. We are grateful to everyone who saved him. 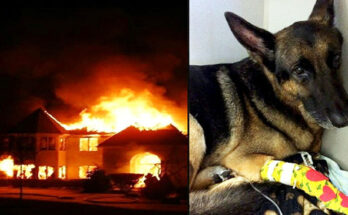 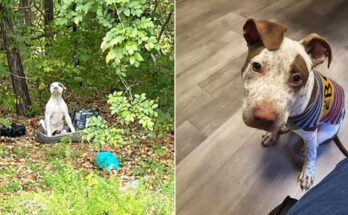 Left alone in the forest with all his belongings, a puppy waits for someone to see him