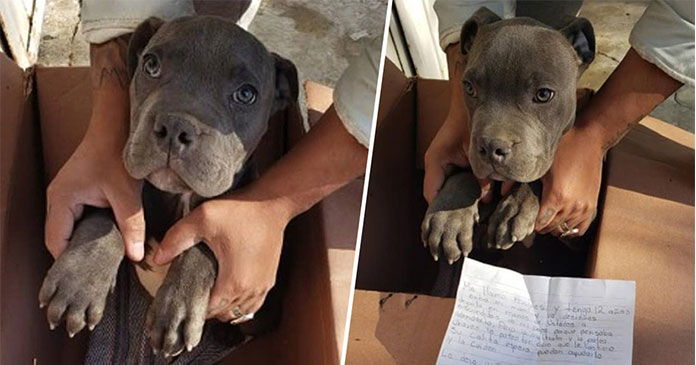 How perfect the world would have been if every dog gets to live with its loving owner. But the world is not so perfect and sadly many dog lovers have to give up their besties unwillingly.

Here is the story of a 12-year-old boy who was so much in love with his pitbull puppy that he did not want the poor fellow to suffer abuse at the hands of his father. So in order to save his puppy, the poor boy had to take a harsh decision. Read this to know what he did.

An adorable pitbull puppy was left at the door of an animal in Mexico. The puppy was in a cardboard box, along with his favorite polar bear toy and a heartbreaking note explaining the reason why the pet was left there.

In the note, the boy had mentioned his name as Andres. He further wrote that he and his mother had decided to leave the dog there in the shelter as his father was thinking of selling the pet. According to the letter, the father of the boy mistreated the pet, he often kicked him. One day his father beat the dog so hard that it hurt its tail. The most devastating part is that the boy left the toy so that the puppy should never forget him.

The puppy’s tail was fractured and it needed treatment. Presently the pit bull is in the care of Refugio Xollin, a rescue center in Mexico where he will be kept for getting back to good health before putting up for adoption so that he could find a forever home. They named the puppy Rene.’

We hope that the puppy should get a new home and he should always remember that boy.