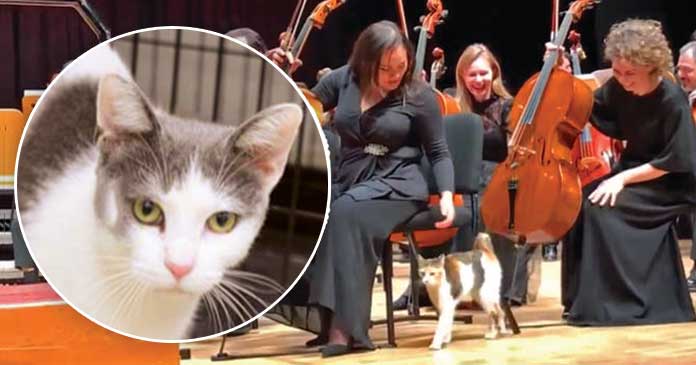 All animals want to be the cynosure of everybody’s eyes especially the cats. They know how to grab everybody’s attention.

But we humans are also to be blamed as we could not resist such adorable beings. Cats are too cute to be resisted and they make their fans wherever they go and they deserve the attention given to them.

In order to know how far the cats can go for the attention, read this article. This particular cat has gone viral for all the good reasons and she is quite hilarious.

The calico cat came from nowhere on the stage where the Borusan Istanbul Philharmonic Orchestra was performing in Istanbul, Turkey.

Before the performance started, this cat appeared on the stage and won the heart of a blonde cellist. She started playing with the hem of the cellist’s dress and all the audience found it very comical and started laughing and applauding cheerfully. 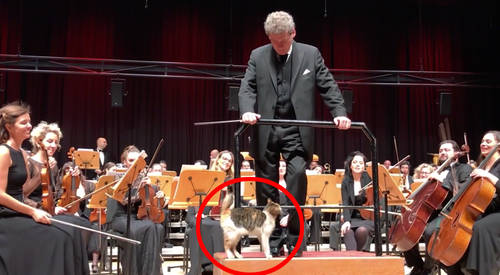 After that, she continues to approach other musicians on the stage. Then she started flirting with a violinist who was very excited about seeing this amusing fellow on the stage.

One of the persons tried to catch the furry buddy but she made it clear that she would not leave the stage and she wanted to be there on the stage.

When the musical performance began, the cats jump to the podium to be able to stand with the conductor. The conductor asked the audience if anybody is allergic to cats. But people find her appearance very pleasing and not disturbing.

As the performance started, the cat listened to it quite attentively and remained on the stage to enjoy the music. Really the cat was fantastic and she was the star with her antics. watch full video