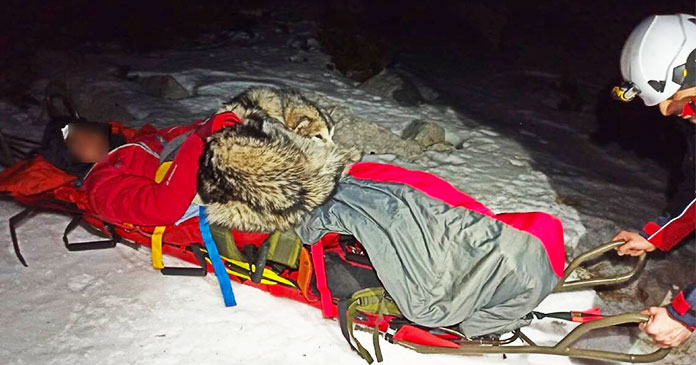 The bond that a dog has with his human can’t be expressed in words. The dog as we know is very loyal and his faithfulness is beyond any doubt. Time and again the dogs prove their loyalty to their humans. Here is a dog named North who is hailed as a hero as he kept his dad safe in the worst conditions.

North, an Alaskan malamute, was there to help his dad, a young mountaineer who was injured and stranded 5,600 feet up on Mount Velebit. A rescue team came to help them but the team of 27 was unable to climb the snowy range on the skirts of the Adriatic Sea coast of Croatia due to severe weather conditions, ice, and broken branches of trees.

Fortunately, the hiker was not alone, he was climbing with his dog, North. The loyal dog remained by his dad even when darkness fell and temperatures dropped. He kept his dad warm and guarded him until help arrived.
According to Hrvatska Gorsku Sluzba Spasavanja, Friendship and love between man and dog know no boundaries.

North went without injuries but his dad was not so lucky. He curled around North for warmth. Luckily, the rescuers reached them on time and they were given medical attention. His dad was able to survive only due to the commitment of the dog.

According to one of the rescuers, the loyalty of the dog did not end there, he remained with the man for 13 hours even when the rescue team came. At present, North is at home relaxing and getting love and treats. His dad will soon recover and join him. North is a real hero and he did a great job by saving the life of his dad.