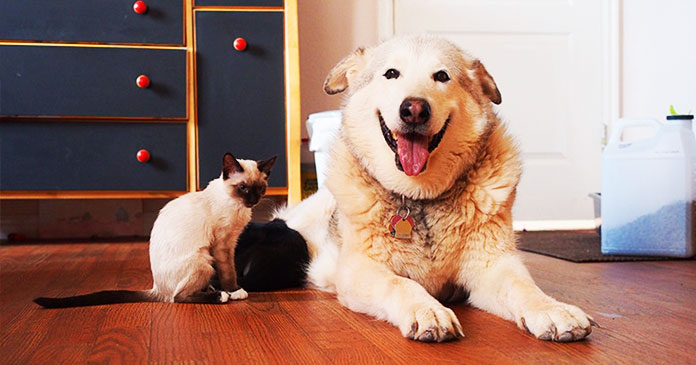 Dogs develop an emotional connection with the animal they are living. They became unhappy if their best friend passed away.

Here is the story of a huge dog named Flora who lives with her parents in Kanab, UT and she also had a best friend, a cat named Dexter. They look very different if we just look at their appearance as Flora is an Alaskan Malamute who liked to play with Dexter who is a very small cat.

Both were best friends and quite inseparable but as fortune has it, Dexter got sick and soon passed away. Flora was left alone.

The going away of the best friend made Flora very sad. She became emotionally imbalanced and her family the Williams decided to provide company to her. So they bought home two adult cats thinking that the cats could provide company to Flora. 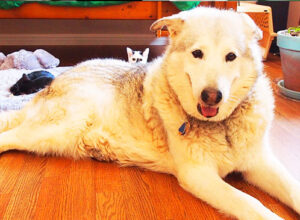 But the opposite happened, the cats were very much scared of the huge dog. Though the dog was kind towards them yet there was an instant connection between them. The cats showed no interest in cuddling with the dog and the dog continued to suffer.

The family decided to give more chance and this time they brought four foster kittens – Iggy, Bowie, Roxy, and Glamour. The kittens were given the children’s room so that they could settle down and even Flora was not in a rush and she was patient.

Then one of the kittens decided to say hello and it came near and had a friendship with the dog. Soon the other three kittens too got the confidence and they too became friendly with the dog.

Flora is a new foster mother and she is quite serious regarding her responsibilities. The Williams family calls the dog now Kitten whisperer and they are confident that when these kittens will move they will be well trained by Flora. Flora will help all rescue cats find a good house as a way to honor her friend.