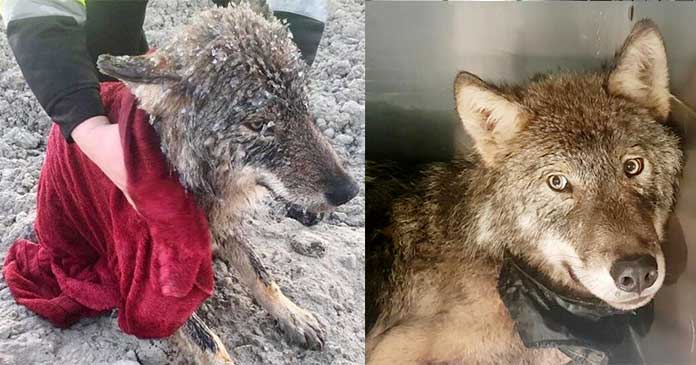 At times we are surprised by the surprises which life throws at us. You never know what will happen the next minute. Even when we are prepared to face the odds, and consider all the possibilities still there is something that will surprise us. Here is an incident that proves this.

It was a normal day for three Estonian dam workers Rando Kartsepp, Robin Sillamae, and Erki Vali. They were going on normally when something caught their attention. It was a dog who was struggling in the icy water. As the men were very kind, they quickly rushed to the river to save the animal. 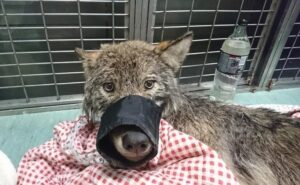 They took him out and wrapped it in a blanket to keep it warm. They did not have a good look on the dog but it was a good-looking dog with yellow eyes. The dog had thick fur on his body that helps him in the freezing water.

Though they saved the dog, he still needed help as he was shivering a lot and he was in a poor condition. The body temperature of the dog dropped very low and he was facing the risk of hypothermia. In order to help the dog, the kind-hearted men took the dog to the veterinary clinic for proper care.

They put the shivering dog in the pick-up truck and took him to the local animal hospital. As they were moving the poor boy fell asleep on the way. The dog laid his head on Kartepp’s lap and rested. When they reached the hospital, there arose a problem. It was regarding the identity of the dog. 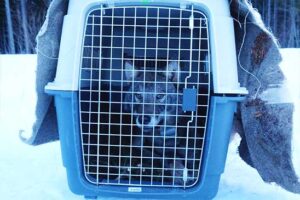 The vets could not identify the breed of the dog and decided to call a local hunter. The hunter revealed that it was not a domestic dog but was a wolf. Everyone was surprised by the revelation as they did not suspect that he would be a wolf though they were not sure of his breed.

He would have done anything to the workers who brought him in their truck. But the wolf was docile or maybe he was weak to do anything. Maybe he felt that he was saved by those workers.

After he made recovery, he began to behave like any normal wolf. So he was kept in the cage for the safety of everyone. later when he had fully recovered he was sent into the wild. For his safety, the Estonian National Environment Agency even attach a GPS collar to trace his location. When he was released, he ran into the wild.

The latest update regarding the wolf is that he is doing well. Good luck, boy.