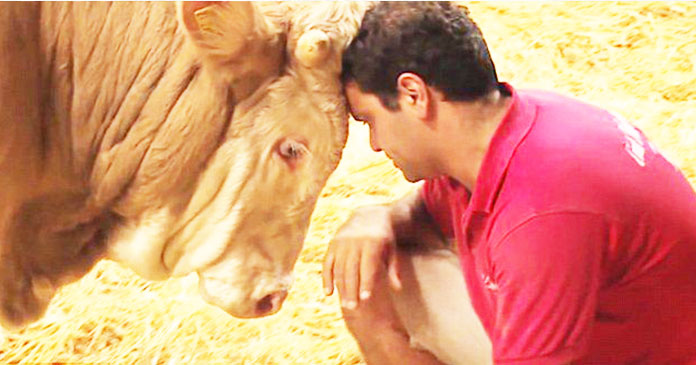 It is never a good thing to abuse animals, it does not matter whether the animal is a cat, a dog, a pig or a cow. All deserve to be free.

Like this bull named Bandit which spent his whole life shackled in chains. While he was on the farm, he was not allowed to go out and eat the green grass. He spent his whole in a narrow cage.

Seeing at his life, one thing is clear that we should pay attention to what happens to farm animals like cattle or pigs and they should be treated with compassion.

But there are lots of people who are very kind-hearted and who are ready to help those hopeless farm animals. One such man is Christan and when he came to know about Bandit’s situation. He immediately started to make plans to save the bull.

The first time when Christan visited Bandit, he just gave him a signal informing him that he was not going to harm him.

At first, the bull did not believe Christan but then he realized that Christan was there to help him. Bandit understood the intentions of the man and started licking his hand. Christan could not ignore this and decided to take the bull with him.

The moment when Christan unchains the bull was very heartwarming. The reaction of the bull could not be described in words. Bandits started dancing as he got freedom and he brought tears to everybody’s eyes.

Here this thing is to be emphasized that cattle and dairy cows are really sensitive animals. They were deeply affected by the emotional and physical pain of early separation from their mothers and dehorning, resulting in pessimism.

Here there is wonderful news that the Austrian animal rights organization Gut Aiderbichl where Christan works as a volunteer had announced that all the animals which were with Bandit were rescued and they were shifted to one of their shelters. Really that is wonderful. We need more people like them who could understand the feelings of the animals.