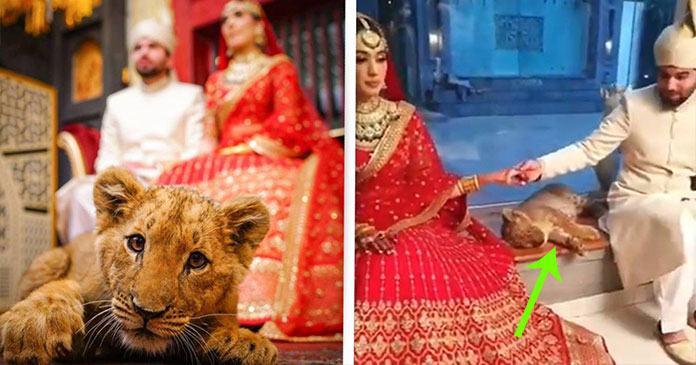 Tradition has been an important part of the wedding celebration. Many couples like to break the tradition and want it to make personal.

Nowadays, there is a growing trend of extensive photoshoots. Couples like to make their wedding very special by doing something unique. Some people are fond of shooting with their pets in order to show their importance in their lives.

But if the same thing is done with the wild animals and that too by sedating them, then it becomes quite unacceptable. It will surely be criticized. The wild animals can not be treated in this manner.

In the photos, the couple is seen holding hands over the sedated lion cub while in the other photo, the couple sitting at a distance from the sad-looking lion cub.

The pictures of the shoot went viral and faced a huge backlash. There are a huge outcry and criticism from the animal rights activist who was worried about the health and treatment of the animal. The pictures were posted with the hashtag #SherdiRani and special emphasis was given on the presence of the cub.

This was first noticed by JFK Animal Rescue and Shelter on Instagram. However, after the flak, the photos were removed but the question is whether the studio has permission to use the cub as a prop or not.

Whatever may be the case, one thing is sure that animals should be treated this way. They are living beings, not decorative items. watch video