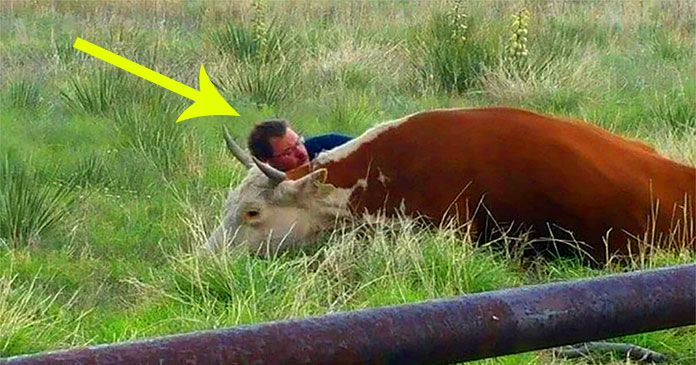 Animals experience a wide range of emotions. They go through tragedies and had to bear heartache. Unlike human beings, they are not consoled by anyone. They have to endure disappointment alone.

But sometimes human beings step in to help the voiceless bear the pain. One such incident happened with a cow who suffered a tragedy but she was helped by a kind human being who just came in the time and offered her the love that she needed.

The name of the man is Benjamin Tipps who was visiting his mother-in-law’s house in Texas where he saw a distressed mama cow.

The cow just lost her newborn calf after undergoing long and difficult labor which had lasted several days. The cow was sad and lay down on the ground to say goodbye to her baby. Benjamin was so touched by the scene that he went to the mother cow and lay with her and tried to comfort the cow.

His act of consoling the cow was caught on the camera and shared on social media with the words that the man had a great heart. He tried to comfort the cow who lost her baby.

Benjamin told the media that he saw the cow suffering misery and he could not control himself and went to comfort the cow by hugging her during the hour of need.

We salute this man and his effort.How better this world would be if all of us have that same level of empathy for animals.