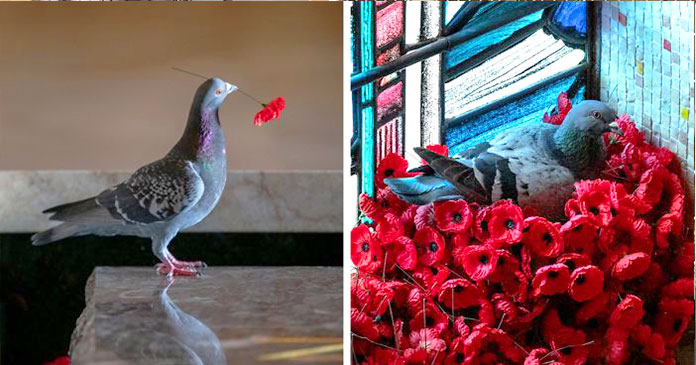 Due to urbanization, birds and animals are left with very little space. With the passage of time, they have accepted the new way of life. Birds started making nests in whatever places they feel are comfortable.

So here is one pigeon in Australia, which surprised everyone with her creativity. She made a nest with poppies.

This creative pigeon stole the flowers from the Tomb of the Unknown Soldier, at the Australian War Memorial in Canberra. The stolen poppies were used to make a nest and also to avoid getting hurt by the pigeon wire installed on the sill. 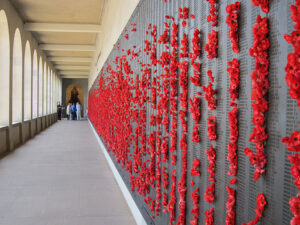 Both pigeons and poppies are related to soldiers as pigeons played a crucial role in WW1 and WW2. The poppies are a symbol of endurance for the soldiers.

The staff at the War Memorial was very confused about the disappearance of the poppies.  They did not have any idea where the poppies were going. But soon the innocent thief was found when someone saw lots of poppies next to a glass window. 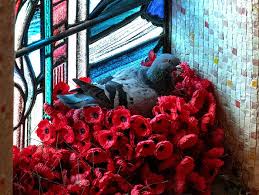 Another coincidence was the stained glass window where the bird build the nest shows the Wounded Soldier. It actually shows that the pigeon wanted to remind the people of the powerful bond between man and bird in the war.

Historian Dr. Meleah Hampton explained that the pigeons were of great use in warfare for sending messages. They could get through when nothing else could. 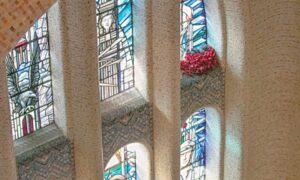 Pigeons played a great role during WWII. At that time 32 pigeons were honored with the PDSA Dickin Medal which is given to trained animals for their devotion on duty.

One of the most famous pigeons was ‘White Vision’ which helped in rescuing an aircrew in October 1943. So pigeons had a great place in war history. This particular pigeon shows the relationship by taking poppies from the war memorial.