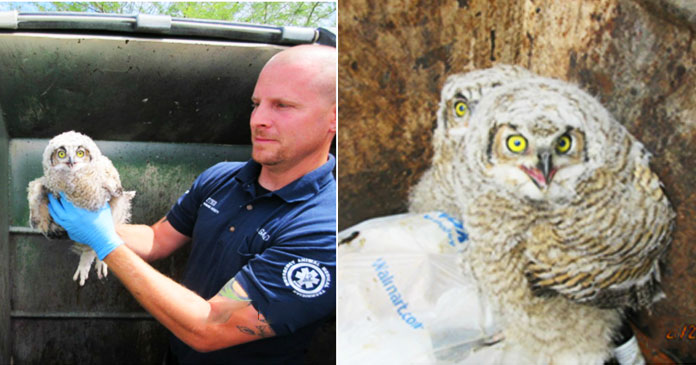 Some people are only after animals to inflict pain and they are doing the worst they can do for the animals. But some very good people are also there who would go to any extent to protect the animals.

A similar situation arose in a dumpster which is near 19th Avenue and Camelback Road in Phoenix. Two owls were dumped there and they were in serious need of rescue. Fortunately, a Good Samaritan found them and immediately alerted the Phoenix Police Department.

Arizona Humane Society’s Emergency Animal Medical Technicians were informed and they came to rescue the owl. AHS EAMT Andy Gallo immediately jumped into action and he entered the dumpster to rescue the owls. He then informed Wild at Heart Raptors who came and took the owls and are now caring for them.

It seems that the owls were five weeks old and they are in a good health. Though it appears that someone might have abandoned them purposely. But it is sad to know that we won’t be able to find who had done to those innocents babies.

It is to be noted that if people see anything wrong happening to the animals. They should call out to the organizations as there are a lot of people who are ready to help animals in distress.