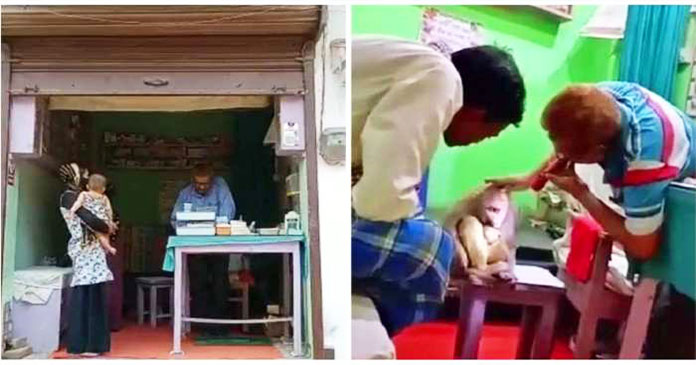 Proving their intelligence, they even walked into a doctor’s clinic in India to get the help from the doctor. The incident is like this that a wild monkey and her tiny baby arrived at the doors of Dr S.M. Ahmed’s clinic and it appeared that they were asking for help.

According to a report published in a newspaper, Ahmed saw a monkey outside his clinic. The monkey had
an injury on her head and even her baby had also hurt the leg. Considering that the monkeys need medical help he signalled the monkeys to come inside.

Clutching the baby around her chest , the monkey came inside and sat calmly as the doctor started examining her and the child . After careful examining the wounds,the doctor gave a tetanus injection and also spread ointment on the wounds of both the monkeys.

Doctor has an unusual patient as wild monkey asks help for her baby As it has happened first time, in that area that a monkey and her baby entered the clinic to get the medical help so a curious crowd gathered outside the doctor’s clinic to see the unlikely patients.

The monkey and the baby were not frightened by the crowd and they even rested on the bed in the clinic. Everyone was impressed by the monkey who had chosen the perfect place to get the help for herself as well as the baby.

After getting the treatment as well as the rest when they felt well, they left the clinic on their own accord. So that was how the story has an happy ending which was brought both by the devoted mother as well as the doctor who had helped them.