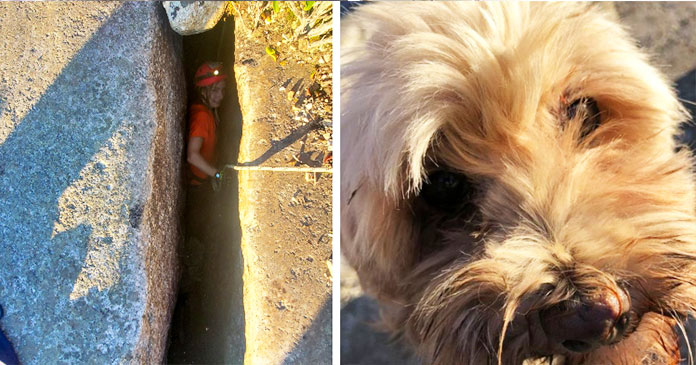 On June 14, trail crew member Rose Williams was performing trail maintenance when he heard the cries of a dog. He became worried that the dog was in danger. After his shift got over, he along with other employees, Jeremy Browning and Jonathan O’ Neil went to help the dog. They followed the cries of the dog and found a dog caught in the crevasse.

Sometimes animals end up in situations over which they have no control. In such situations, they are helped by some kind of human.

So here is a story of one missing dog whose life was saved by the quick action taken by the employees. The incident goes like this. Three employees from the New River Gorge National Park and Preserve rescued a dog trapped in a crevasse.

After helping the dog, they were able to reach her owners with the help of the collar. The owner informed that the dog was missing for a week and it is likely that she had been trapped in the crevasse for many days.

Anything could have happened to the dog if those employees didn’t help the dog. The employees were praised for their actions. Even the New River Gorge National Park And Preserve were proud of their employees.
It is really very happy news that the life of a dog was saved. Hats off to the employees.

The dog was stuck on a rock and it might have happened that it was never found but due to the quick thinking of the caring employees, the life of the dog was saved. According to the Facebook post, the employees were able to get the dog safely and pull her out on time.

After the dog was pulled out safely, she was provided with water and snacks. The dog was very excited to meet her new friends and showered them with lots of affection.