Those who love animals can go to any extent for their animal. It doesn’t matter what the difficulty is but their main concern is the safety of their animal.

A similar incident happened when a man fights an alligator to save his dog. The video of the incident has gone viral and since then praise has been pouring in for the bravery of the man.

Richard Wilbanks went for his usual Sunday morning walk by the edge of the pool with his puppy Gunner a Cavalier King Charles spaniel in Estero, Fla., when suddenly his puppy was attacked by an alligator. According to Wilbanks the alligator came out from under the water very quickly and got hold of the puppy and was dragging him back into the water.

Wilbanks just acted on his instinct and without thinking much jumped into the pond to save his dog. He took hold of the alligator and dragged the alligator near the bank and freed his puppy from it.

As the alligator was a small one, he didn’t face much problem in tackling it. He very easily brought the alligator near the bank but it was quite difficult to open its jaws and free the dog which was held from its belly.

Wilbanks further said that he never expected that the reptile can be that fast. But he is happy that his three-month-old puppy is safe and only got one deep wound and now he is healing well while Wilbanks himself got few wounds on his hands. 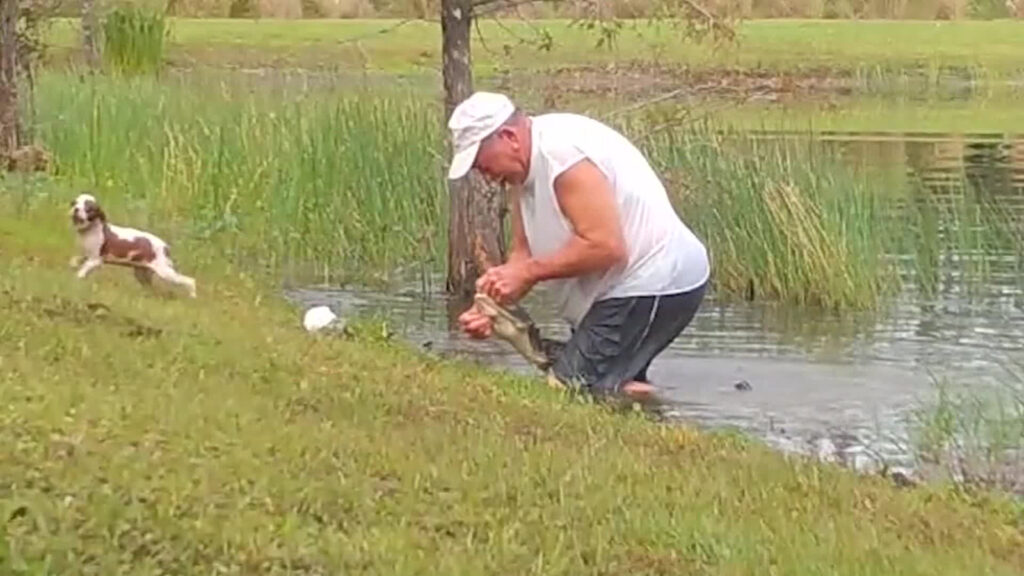 This whole incident is recorded on surveillance cameras put up by the Florida Wildlife Foundation and fStop Foundation. The main motive of this group is to see the wildlife activity around the homes which are near the wild areas, and how animals can co-exist with humans.

This recording was founded by the group as they were going through the camera. Wilbanks said that he developed a healthy bond with that pond and he didn’t want to hurt the alligator. That place was the alligator’s home and he has not done anything wrong.