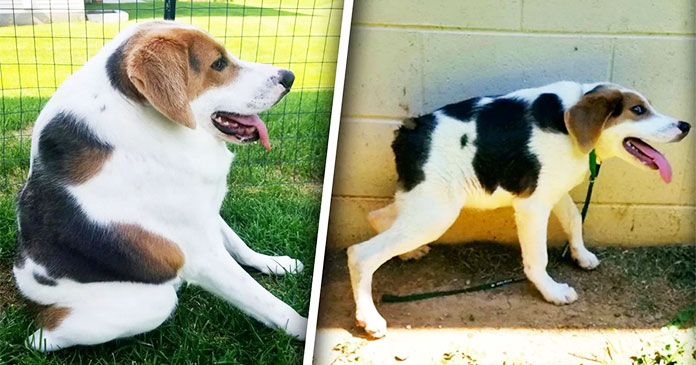 Every dog is special and unique in their own way. All of them deserve loving home and love of the family. So here is one dog who is very unique as he was not having the neck and even the spine was half. Though in the beginning he suffered a lot due to his differences yet in the end he got a loving and forever home.

The name of the dog is Cooper which is an American foxhound and he was born with the condition called ‘short spine syndrome’ in which vertebrae are fused together and compressed. The condition which the dog had was very rare and he is the only one in 30 dogs in the world with the condition.

According to his owner Elly Keegan, his spine is fused in two places and it looks like he is not having a neck and in order to look behind, he has to turn his whole body. The dog has very difficult start in the beginning. He came from a puppy farm in Halifax, Virginia and he was abandoned due to this genetic condition.

He was found in 2017 by rescuers and taken to Secondhand Hounds, which is a shelter in Minnetonka, Minnesota. At first he was adopted but things did not work out there. But soon Cooper found a perfect home and perfect family in the form of Elly Keegan and her family.

Many people ignored Cooper but Elly made him the part of his family. She has special love towards differently abled dogs and she committed to give him the perfect home that he deserved. Cooper’s condition is such that he needed medical attention but she had the help of Secondhand Hounds.

Once the dog fell down fracturing his neck in five places and he even had a bone infection. There is improvement in Cooper’s condition. According to Elly, Cooper is a very happy dog and wherever he goes he draws attention. It is very news that Cooper found a loving and happy home.