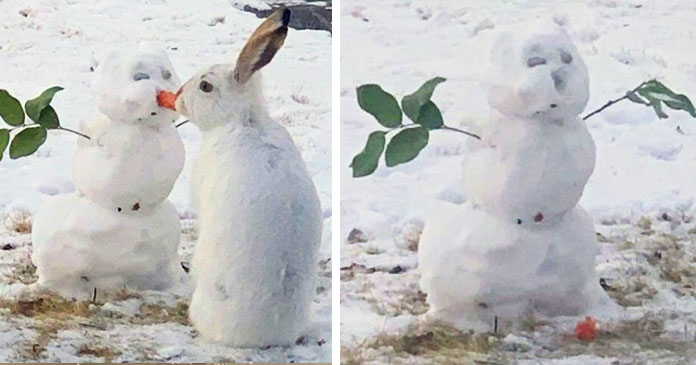 As the winter season arrives, we see snow all over the place. So if the snow is there, there are snowmen. Kids are very elated to see them. So are some animals like deer and rabbits. But for them, the center of attraction is not the snow with which they are made but they find their orange nose quite lovable.

There is this family in a Suburb in Canada who like any other family made a snowman in front of their house. In the beginning, they thought that only the sun is going to melt the snowman and destroy it. 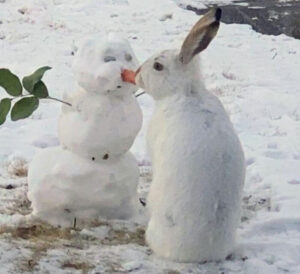 But they were wrong as someone else came to destruct it. Their snowman was devoured by a small furry creature. The family was helpless as the scene was very cute and the only thing they did is to shoot the adorable scene on camera.

At that time, Bryant’s family did not have any idea that their video would be such a hit online. In the video, Shiela is found saying ‘Just giving him a kiss’ and explaining the reason why she was shooting the video.

It is not the first time that a rabbit was found eating the carrot of a snowman. These incidents more often now and people are actually loving them. They are even writing poems about it. 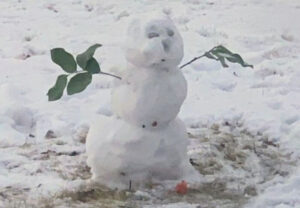 The poem is “ There was a little snowman who had a carrot nose. Along came a rabbit, And what do you suppose? That hungry little rabbit, Looking for his lunch, Ate the little snowman’s nose- Nibble, nibble, crunch!”

How interesting the poem is! Really the rabbit eating a snowman is quite unique and everybody loves it.