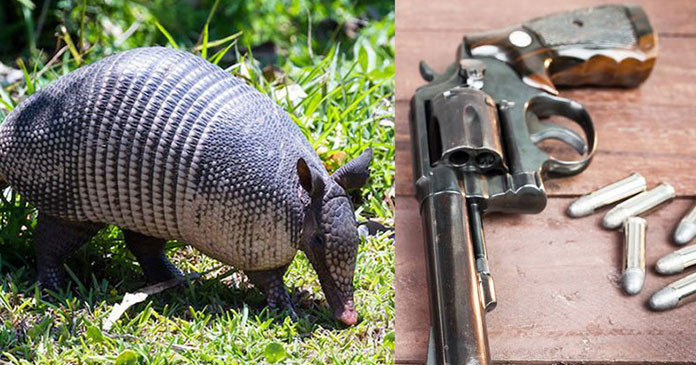 Karma is the good or bad effect of doing something. It will affect the future of the person. If we perform good deeds, we will reap good benefits. But if we perform bad deeds, we will have to suffer. The man in Texas had an instant taste of karma when he decided to shoot an armadillo. Though such activities are quite common in Texas yet what followed after this shocked the man.

Armadillos are characterized by thick and hard outer covering like an Armor shell which protects the animal from the predator. So the incident goes like this, the man from Texas shot an armadillo, luckily for the armadillo and unluckily for that man, the bullet ricocheted off his hard shell and did a boomerang. It returned back to the shooter and hit him in his face.

The incident happened in Cass County, Texas. The sheriff of Cass County said that after the incident, the animal was not found. The man shot the armadillo three times with his. 38 revolver when he spotted the animal on his property. It became a classic case of karma. The man was taken to a nearby hospital where his jaw was wired. Animal lovers are in love with the armadillo for punishing the man.

Ricky Gervais, comedian and animal rights activist described this as Karmadillo. Nine-banded armadillos are the only armadillos found in the United States and they live up to 7 To 20years, so there are still chances that little warrior is alive.

God has many ways of saving his creatures. Don’t think that they are alone.