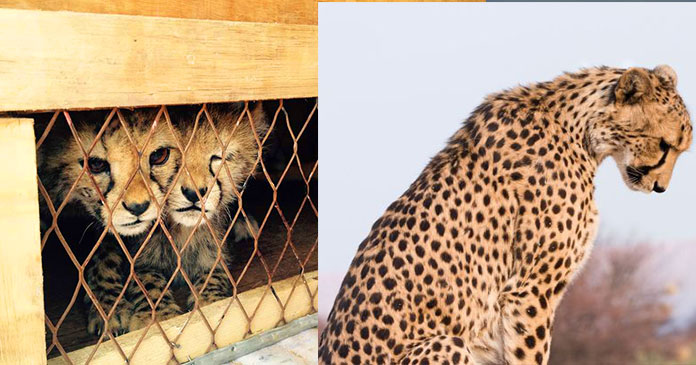 The fastest animal on the earth is facing extinction. It is very disturbing and we, Humans, are somehow responsible for it.

Cheetahs are large cats mainly found in Africa and Central Iran. It is the fastest land animal. Its physical features like light build, long thin legs, and a long tail help it to run at such high speed.

The animal is a perfect example of grace and ferocity. It can remain calm and still without moving a muscle and then it explodes like a raging storm and again becomes calm, once everything ends.

The animal is very beautiful. Its coat is tawny to creamy white and it is covered with solid spots that are evenly distributed on its skin. Its head is small and rounded. Its face has tear lines. It likes to hunt during the day. The animal in itself is very special. But it’s quite alarming that its number is dwindling to such an extent that it may face extinction.

Earlier also Cheetahs have faced extinction at least two times in the past after their population was reduced considerably, leading to inbreeding. Again they are facing the same danger of extinction.

The main reasons why they are prone to such types of dangers are climatic changes, hunting by humans and even their habitat is destroyed. Apart from this, their own genes are also responsible. They have a low rate of reproductive success means as a species they are not always able to breed. So they are left only a few which can neither grow nor adapt to a new environment.

The other main reason for their number becoming less is that they refuse to remain in one place. They roam from one territory to another. Moreover, their nature is very elusive and it made it very difficult to study them.

The loss of habitat has driven them towards human territories. People sometimes kill the animal thinking that they pose a danger to their livestock.

Another danger is that they are facing is the illegal trade of the cubs. Cheetah cubs are captured in the wild and then smuggled. It is estimated that many of them die on the way to their destination. These cubs have a special diet that is not met and as a result, they die. Moreover, Cheetah cubs are highly vulnerable to other animals like lions and hyenas.

The other threats are that they are hunted for their hide, subject to a vehicle collision. Sometimes they are killed for bushmeat, though this threat is on Cheetah’s prey animals like antelopes, gazelles, impalas, and warthogs.

Cheetahs are facing a double blow. Either they are killed or their prey, in both cases they are the ultimate sufferers.

Scientists believe that less than 8,000 African Cheetahs and fewer than 50 Asian Cheetahs are left in the world today. These numbers are quite shocking in themselves.

Quick actions are required if we want our future generations to see this beautiful creature. Otherwise, we will be left with the stories to tell them.