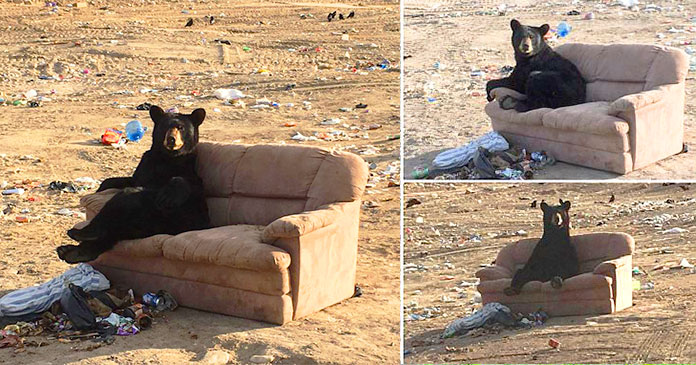 Everybody likes luxuries of the life. We want to enjoy them as it is human nature to be comfortable. But how can we describe any wild animal enjoying the luxury? They will look extra cute if we find any such incident.

Everybody will be smitten by seeing such a scene. Just imagine how cute a bear will look if we find him making comfortable and relaxed on a couch that was thrown away by someone. The same thing happened with Mandy Stantic and her family as they were driving around Lac Broche in Northern Manitoba to look for some bears.

But they were completely bowled over by what they saw. The incident was so captivating that she immediately took her camera out and captures some pictures. A cute wild bear was sitting on a discarded sofa making himself looking more cute and comfortable. He was looking very relaxed sitting there. 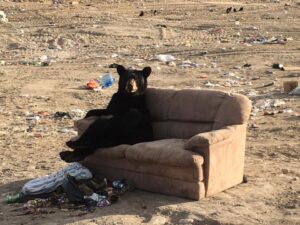 The most fascinating thing was the pose of the bear in which he sat on the sofa. He was sitting very much like a human being. He had kept one leg casually crossed over the other and was resting one arm on the armrest.

According to Stantic, it appeared as the bear had eaten well and now he was ready to relax on the couch. She further added that all he needed now was some popcorn and Netflix. She said that the sight was made funnier as there was also a discarded TV in front of him.

The bears were seen by Stantic and her family from their car and they could not stop laughing seeing the sight. The dump was in between the forest and there was more than enough for them to eat.

Stantic captured some photos of the bears and she says that she could not forget that funny moment. This black bear with that funny pose has become an internet sensation after his pictures went viral on social media.