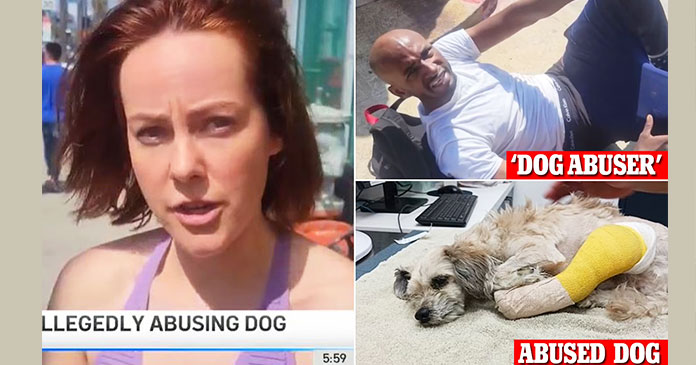 There is no dearth of good human beings in this world. Some even act as savior for some animals as they just arrive at the right moment and help in saving their life. The same thing happened to one poor dog who was brutally beaten up but thanks to some kind witnesses which includes a Hollywood star, to take action and help in saving the precious life of the dog.

It is reported that a man was seen dragging and kicking a small dog which he had on a leash near Sunset Boulevard. As he was beating the dog, there were many bystanders who quickly jumped into action and helped the dog. One of the witnesses of the attack was Hollywood star- Jena Malone.

Jena Malone has acted in films like Contact, Donnie Darko, Into the Wild and the Neon Demon. She is also a Golden Globe and SAG Award nominee. She is famous for her role in Hunger Games franchise. But now Malone has added another feather to her career. She is an animal lover and she did a great work by helping the dog.

According to Malone, she yelled at him to stop from her car but he would not. Then she said that she got out of her car to help the dog but the man started running. Then she saw there was a group that saw the attack and as she chased the man, she was joined by a group of five men and she ‘felt like a miracle’ as she was not alone to pursue the suspect.

She further said that the man was nabbed, she focused on the safety of the dog. There was a heated fight and finally police arrived and the suspect was taken into custody. According to Malone, drastic action was required to protect the dog as he posed a threat to dog’s life. Malone said that she was sorry that it ended in a brawl but the dog was going to die.

She further wrote that the dog was out of the hospital but he had suffered a broken rib and some breaks in its hind legs and there was fracture in its right paw. She felt that it was horrific to see the animal treated that way.

The dog was stolen and his name was Champion and now he was reunited with his owner thanks to a microchip. In order to help, dog’s owner, Kelly, pay the bill of his surgeries, GoFundMe page has been set. So far $12,000 has been raised. It is great to know when Hollywood celebrities step up for animals as they set a good example.