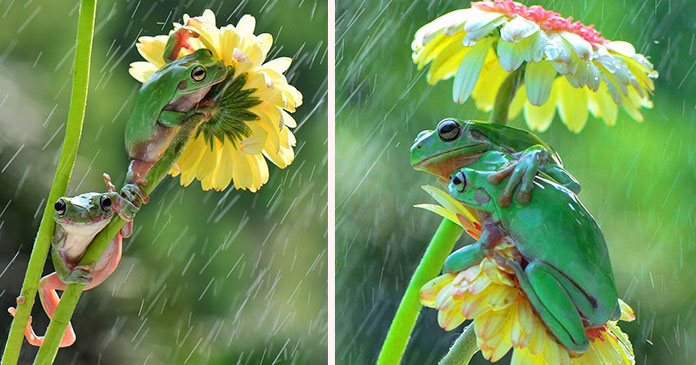 Wildlife photographers try to document various forms of wildlife in their natural habitat. So apart from photography skills, they need field craft skills. They should know knowledge of the behavior of the animals and how to approach them.

They are able to bring us closer to the natural world and it requires a lot of skill, art, and patience. They are able to snap a perfect photo that captures the beauty of nature. 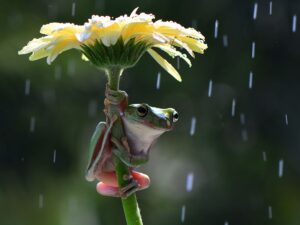 One such photographer is Ajar Setiadi from Bogor, Indonesia and he has special interest in smaller creatures like insects, reptiles, and birds. Due to his patience, he was able to click a photo of two frogs in a very romantic scene.

In fact, many of the striking photos that he shot are of frogs. It is his skill only that the frogs in his photos are having expressive faces.

According to him, he let the animals act and he just waits for the best moment. He further said that he liked to click photos of frogs in the rains because they take shelter in the vegetation, resulting in some unique shots. 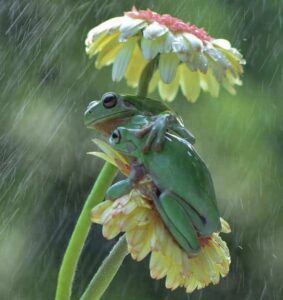 So he was able to take the most incredible photo of two white tree frogs taking shelter under a flower and they were using the flower as an umbrella.

But what made that photo very unique was that the two frogs in the photo seemed to be embracing each other. One frog has kept its arm wrapped around the other and it appears like they are sharing a sweet, romantic moment in the rain.

Setiadi admits that he has taken many photos of frogs and other wild animals but that shot was once in a lifetime one. This photo of Setiadi has become the most popular on his Instagram. This photo shows the sweet side of nature.