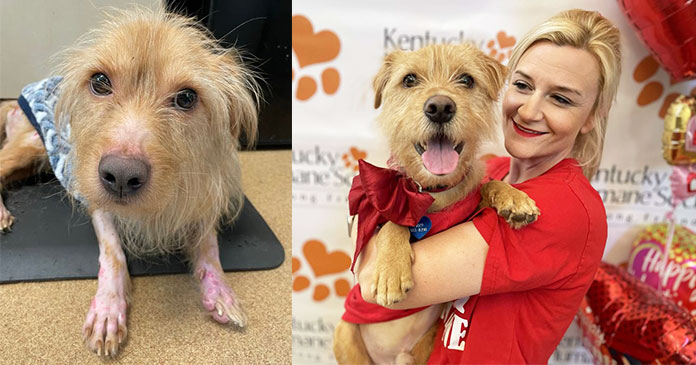 Finding the right family for a shelter dog is a very difficult task. It takes months to years but then also it is not a guarantee that the family is good for the dog.

But sometimes the perfect adopter of the dog is found in the person who cared for it. That was the case for one rescue dog who got a special gift on Valentine’s Day after he was adopted by the vet who looked after him. 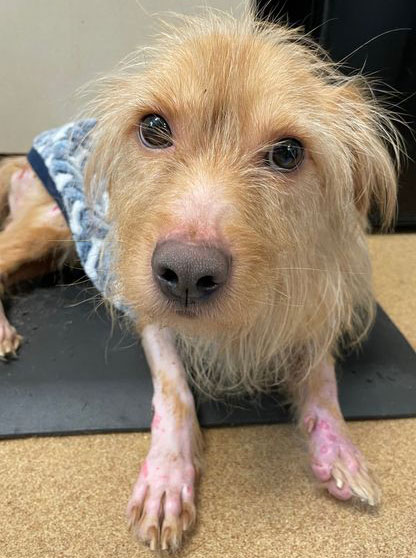 The dog named Travolta came to the Kentucky Humane Society last month after he was rescued by an Uber driver who found him “limp on the side of the road.” The dog was in very poor condition.

He was filthy, covered in feces, severely emaciated, and may even die due to starvation. All his body was covered in sores and maggots and it was suspected that the one-year-old dog had been suffering like this for months.

The dog was so malnourished that he was unable to lift his head. In order to save his life, the dog was given proper care by the vets. Fortunately, the dog was saved and was on the road to recovery.

The dog was given IV fluids and small meals to help him gain weight. As the dog was recovering, he became very close to one of the vets named Dr.  Emily Bewley.

The dog was enjoying all the attention he was getting and became very best friends with Dr. Bewley. Dr. Bewley even took the dog to his home. The dog slept well in the house and was very good with everyone in the house.

At first, the vet was unable to adopt him permanently as she was full, but she was unable to resist the love of the dog. At last, she decided to adopt the dog. 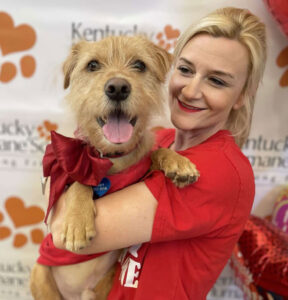 According to KHS, Dr. Bewley was responsible for saving the dog’s life when he was found near death on the side of the road. She spent several weeks looking after the dog and fell head over heels in love with the dog. So it was a true love story and the Humane Society decided to make it official on Valentine’s Day.

Travolta’s adoption was shared in a live-streamed ceremony. His ceremony was adopted by Ethan, the other famous rescue of the Humane Society. Ethan was adopted by a KHS employee. Congratulations to Travolta and Dr Bewley for finding each other.