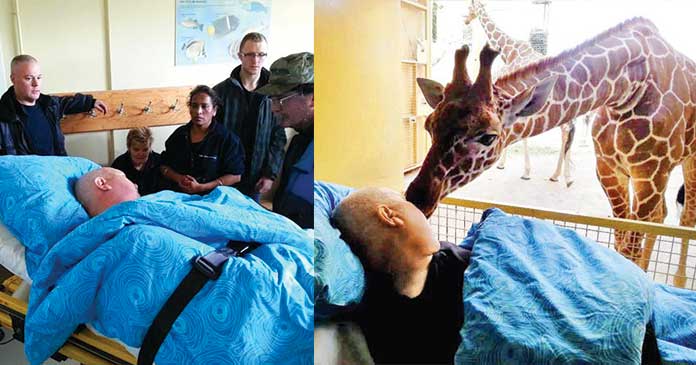 Whom we want around when we are on our death bed. Of course, we want the people who are our loved ones and with whom we spent the major part of our life.

Here is a moving story of a 54-year-old person known as Mario who is suffering from terminal cancer and is left with only a few weeks to live. There is a touching moment when a giraffe came and bid farewell to the dying worker who had spent around 25 years of his life cleaning the animals’ enclosure at a Diergaarde Blijdorp zoo in Rotterdam Holland.

The maintenance worker asked for his last wish and it was that his hospital bed should be wheeled into the giraffe enclosure so that he could meet the animals whom he loved and cared for so many years and he could say a final goodbye to them.

In one of the videos, a giraffe is seen approaching the man and giving him a tender kiss of goodbye. It seems like the animals recognized him and felt that something is wrong. 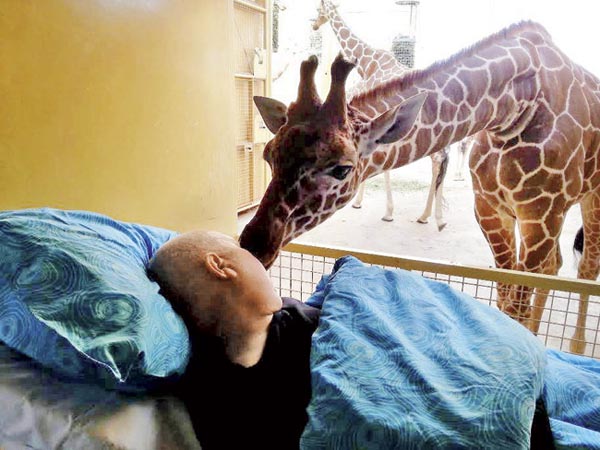 That was quite a special moment and the man was seen happy. Mario who was mentally disabled then asked that he wanted to say goodbye to his colleagues with whom he spent the majority of his adult life.

His last wish to meet the animals was granted by the Ambulance Wish Foundation charity. They were the one who transported Mario to the zoo and told that Mario had very less mobility and find it very difficult to speak. But his experience with the animals at the zoo left him beaming with the zoo and his face tells the story.

The Ambulance Wish Foundation has around 200 volunteers who help to make the last wish of terminally ill patients come true.

For this purpose, they have specially designed ambulances that can transport the patients to the places they want to visit. Various studies prove this that animal has the ability to sense illness in humans.