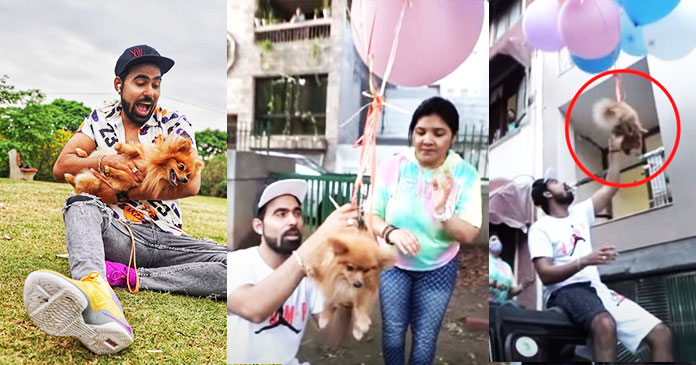 Social media has been a great platform for animals and pet owners everywhere. It provides ample opportunities to the people to show how much they love their pet and how special their pet is for them.

But there are some selfish people who could do anything to gain popularity. They can even risk the life of their beloved pet for it. Some people exploit them for their gain on social media platforms and that is the downside of this.

Here is an incident that will convince that some people their pet is just a means to get cheap popularity. The name of the YouTuber is Gaurav Sharma who is 32 years old and lives in Delhi, India, and has over 4 million subscribers on his channel.

A recent stunt that landed him in controversy is that he tied his pet dog named Dollar to hydrogen balloons and releases it into the air so that the dog could fly. The innocent dog which is a toy Pomeranian floats to the second story of the building. Sharma and his friend cheered for the dog as the dog was floating in the air.

As he posted the video, people were quick to show their anger towards it. He received quick backlash for this stunt. He realized his mistake and quickly removed the video and in a follow-up video he apologized and he even said that he had taken proper ‘safety measures’.

He said that in performing this stunt he was influenced by other YouTube stunts. He further clarified that he loves his dog and treats it ‘like a child’. He even urged the people not to do it.

But this was not enough and the animal lovers were not satisfied by his clarification and members of the group People For Animals complaint that Sharma risked the life of his dog.

After the complaint, he was arrested under Animals Act. Now he is on bail. Such treatment of our pet animals is not accepted. We really appreciate the group who complained against him as it will discourage other people.

We hope in the future people should avoid doing this type of stunts with their pets.