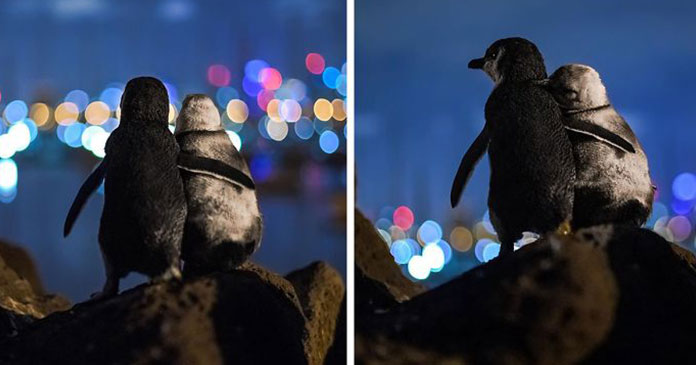 A picture showing two widowed penguins consoling each other and staring into the distance together has won the hearts of people all over the world. This photo of the two penguins who were comforting each other at St Kilda Pier in Melbourne, Australia has won a prize at Oceanographic magazine’s Ocean Photograph Award.

The photographer Tobias Baumgaertner won the community choice award for this photograph of his. These two penguins stood upon a rock overlooking the Melbourne skyline and watched the sparkling lights of the sky seemed to be perfect.

The photographer told that he was approached by a volunteer who informed him that the white one was an elderly female who had lost her partner and the younger male also lost his partner. So they met regularly with each other and comforting each other.

The photographer said that he spent three full nights trying to get the perfect picture. He didn’t use any lights and the tiny penguins were continuously moving and cleaning each other, so it was really hard to get a perfect shot. But he got lucky during one beautiful night.

Congratulations to the photographer.  This image of his moved millions of hearts all over the world.