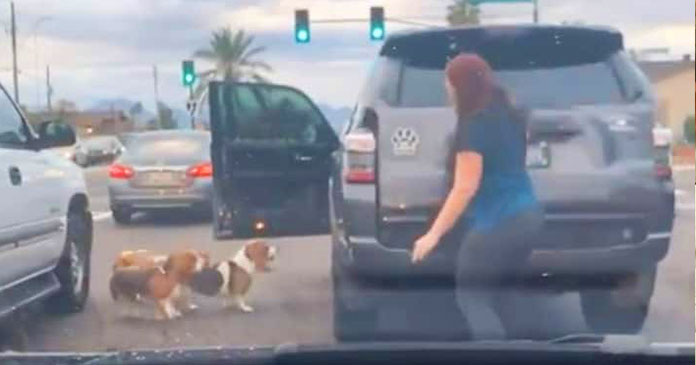 Not all heroes wear capes. That is true. Sometimes we find our heroes in the most unexpected places and doing a small act of kindness but the thing which makes them unique is their instinct to do good for others. Their small act brings about a huge difference and encourages people to be kind.

Here is an incident that made the woman so famous that animal lovers on the internet flooded the comment section with their praises. You can be Samaritan in any way.

In the viral video, the woman is rescuing three dogs from a busy street around very heavy traffic. This incident is a gentle reminder that one can be a hero in any way by doing a little act of kindness.

This video clip from Instagram user Brian Mogg was shared by a page named Nextdoor. The video begins in the backdrop of a scene from a busy traffic crossing where cars could be seen waiting at the traffic light for the signal to turn green.

In this hustle and bustle of the busy city traffic, a woman steps out of her black SUV. Why she got out of the car, interests everyone. She wanted to save the three street dogs wandering around in that traffic. 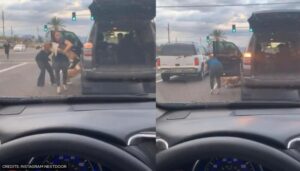 In order to save the dogs, the woman opened the doors and boot of the car so that the canines could enter the car easily. As the signal turned green, the cars started moving but that woman continued with her work of helping the dogs. She is even helped by other people who saw her from the opposite side of the street.

At last, they succeeded in getting the dogs inside the car. This entire incident was recorded by the man sitting in the car behind the SUV of the woman.

This video is liked by animal lovers all over the world and they heaped praises for the woman. The woman was wearing heels but that did not stop her from running behind the little dogs.

It is really good to know that there are still people like her. Hats off to you, mam.