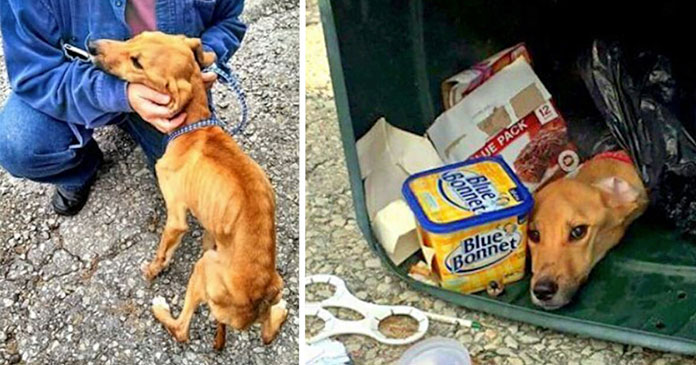 It’s shocking to know how a large number of animals are dumped by the owners because they are not convenient for them.

One dog who had this horrifying experience belongs to Pennsylvania. The dog was put in a trash can and dumped like garbage. The dog who is only 9 months old is discovered by trash collector Nathan Binnie who was shocked to see the dog in the trash.

The dog was so emaciated that one could see its every bone. She was shivering and shaking. Animals should be given the same treatment as humans. Trash collector Nathan waited for the help to arrive. The dog had been microchipped so the officers at the Humane Society of Westmoreland County were able to trace the owner of the dog.

Originally the name of the dog was Mia and was renamed, Fawna. Officers were able to trace the owner of the dog, a woman who moved to Texas to be with her boyfriend. She thought it was okay to leave her four-legged friend in the trash and be with her boyfriend. She thought it to be okay to starve the voiceless. Police said that the dog was starved for six weeks before dumping. So the dog weighed just 17 pounds when she was found.

Her owner pleaded guilty to the cruel conduct of the dog. She willingly decided to enter the Accelerated Rehabilitative Disposition Program on animal cruelty charge and even fined $ 600 restitution.
Fortunately for Fawna got the house she deserved as a veterinarian Meghan who nursed the poor pup decided to adopt her.
We wish Fawna all the best in her new life.