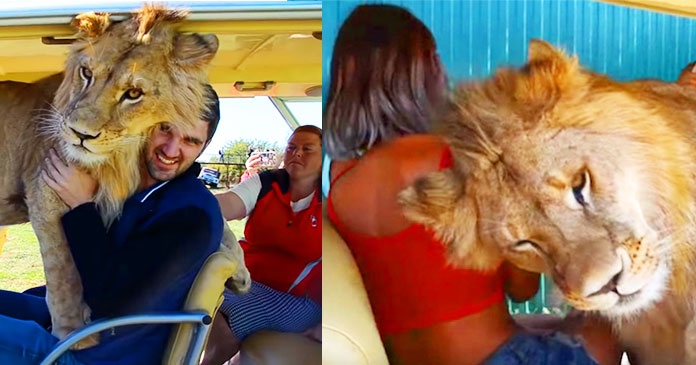 What comes to our mind when we think of a lion. Of course, our mind is filled with fear thinking of that majestic animal. Lion, the king of the Jungle is the most feared animal. It is a fierce animal and displays royalty. Aggression and Lion are synonyms to each other.

But we all that fantasy, means most of the people to touch that thick mane that makes him so royal. How good it would feel if ever the Lion allows to touch him, to cuddle with him.

But this dream actually changed into reality by a little lion named Filya, whose craving for attention landed him on a bus full of tourists and he requested cuddles.

The incident is like this that one-day Filya, the lion came near a bus full of tourists and he showed no sign of aggression as he approached the bus. Looking at how politely the lion was behaving, he was allowed to board the bus.

Just imagine the king of the jungle is there on the bus, how would you behave. The next thing that happened took everyone by surprise. The lion proceeded to lick several people of the bus. He was also rubbing his face as a sign of affection. It showed that the lion only wanted to be loved.

People were delighted to see this soft side of the otherwise violent animal. They allowed themselves to be licked by the animal and gave him hugs. The big cat seemed to enjoy his time with the people.

Some people even made videos on their cameras. They did not want to miss this beautiful moment.

Check out this lovely video of the encounter to know more.