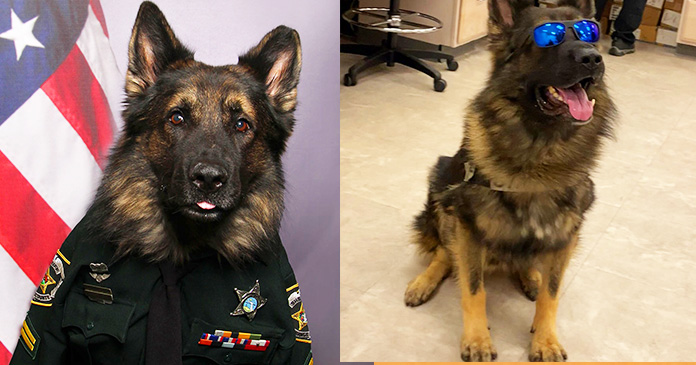 We know dogs are very cute. With their large, round heads, big and innocent eyes, soft fur, drooping ears, clumsy movements they look very appealing to us. But if a dog is adorning a uniform and posing for a camera, what will be the reaction of dog-lovers.

Obviously, they will go gaga over it. The dog in a uniform means serious business and it’s not about looking good. So let me tell you about this particular dog how his photo taken for an ID had made him an internet sensation.

Meet K9 Chico, a German shepherd under the Orange County Sheriff’s Office. He works as a drug detection officer and a patrol dog.

If you are not familiar with K9, let me tell you it’s a police dog unit and this word is a pun upon the word canine. K9 Chico has been with the Orange County Sheriff’s Office for about 4.5 years. He is 5.5 years old. But this is the first time he had worn a human-like uniform. His handler, Corporal Robert Lees wanted to make Chico feel special for the photoshoot so he was donned in a police uniform.

Moreover, he is an officer of the law and he had to be in a formal look. But the thing is that he didn’t disappoint anyone with this look. It seems that he is the cutest officer ever. It’s not like that he looks good only in uniforms but he is able to pull off the casual look also with the same grace.

The best of American police dogs are awarded American Humane Hero Dog Awards every year for their role in different police activities related to law. Their work involves detecting explosives and narcotics to mention the least. Chico being one of them helps to do all this stuff as he having heavy responsibility for his shoulders.

But apart from his work, when he is free, he likes to play tug of war or with dog toys. His colleagues considered him to be a very important member and they are really happy that his photo in full uniform is generating smiles across social media.

Here’s wishing this cute officer all the best for his future photoshoot. We are eagerly waiting when he will stun us with his unusual photo.