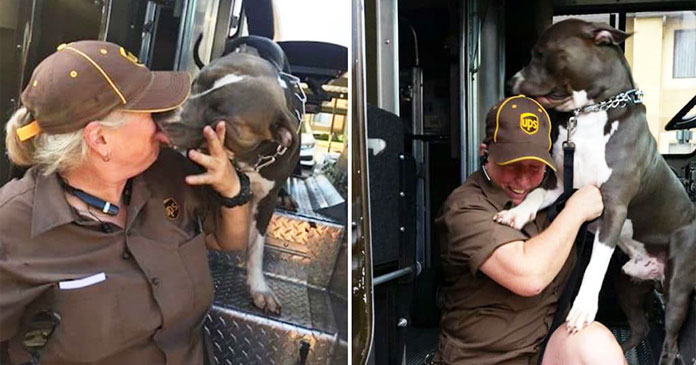 We have seen many cartoons as well as sketches showing how a mailman was chased off or barked at by a dog. But the reality is quite different. There are many delivery workers who have become best friends with the dogs.

One such worker is a driver Katie Newhouser. She loves all the dogs she meets on her daily route but she loves one dog in particular.

Maybe it was that special bond that made her adopt that dog. Katie Newhouser is very much fond of dogs. She has three dogs at her home. But still, she loves hanging out with all the dogs on her delivery route.

But one dog was very special and it was a pit bull called Leo. Whenever she pulled into the condo complex, the dog starts barking. 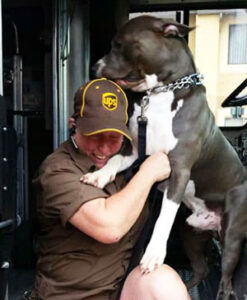 He would jump into her truck. Katie was even friends with Leo’s owner Tina. Tina told her that Leo was found when he was a puppy and he had to be bottle-fed.

According to Katie, Tina and Leo were very close to each other. Katie was heartbroken when she came to know that her friend and Leo’s mom, Tina had passed away.

When she reached out to Katie’s son to ask him about Leo, he told her that he was unable to keep Leo as he was on an active duty marine. At that time, Katie decided to adopt Leo herself. As Katie was already having three dogs so Leo was a bit confused in the beginning but he has adapted well. 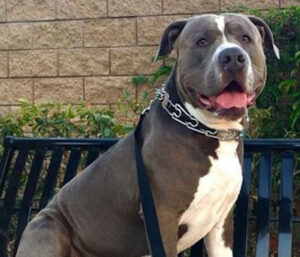 Though Leo misses his mom, Tina a lot yet he was able to get a loving home. It is really great news that the helpless dog was adopted by the UPS driver. We hope that Leo continues to bring smiles to people’s faces.