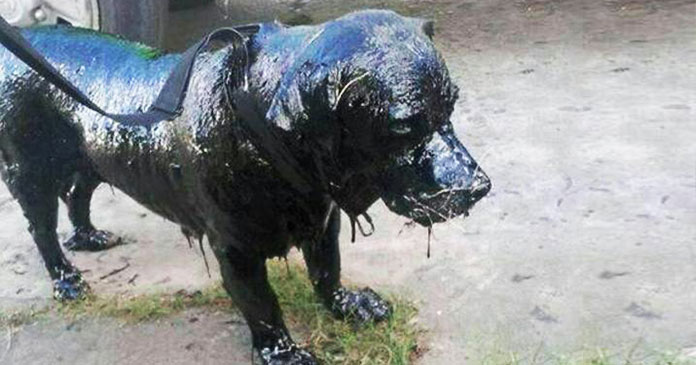 It is really miserable to know how badly some dogs are treated. It is undoubtedly difficult to understand the mentality of such people who stoop down so low. What a person can gain in maltreating an animal.

Recently, one dog was found covered completely in tar in Lanus, Buenos Aires, Argentina. The dog was spotted by two young men who at first thought it to be a slimy black creature coming out of the ditch. 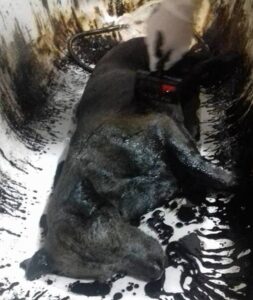 When they got closer, they realized that it was a dog. It seemed someone had intentionally covered him with tar and left him there to suffer.

The two guys decided to help the animal and they went to the police station. Along with an officer, they took the dog to a vet and after that, the dog was sent to an animal rescue group called Zoonosis Lanus.

Volunteers tried to remove the tar by placing the dog in a bathtub but nothing happened. The tar stuck to the dog-like glue and it wasn’t getting off his skin.

Then they tried every possible method to remove the tar but nothing worked. At last, they found one idea on the internet.

The solution was to use oil to loosen the tar and then remove it with a spatula. They used 5 liters of oil to clean the dog. 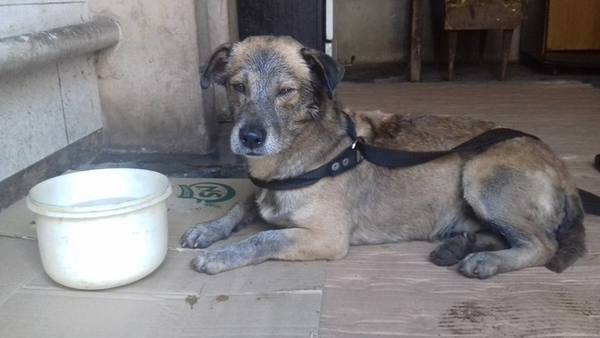 After working hard for three hours, the team was only able to remove about 30 percent of the tar. After five hours they were able to finally see the dog’s fur. after few days he was looking like a beautiful dog.

The dog is named Petroleo and even the two guys who first spotted the dog helped in the removal of the tar. Now Petroleo is looking for a forever home.  We wish that he will find a lovable house soon.