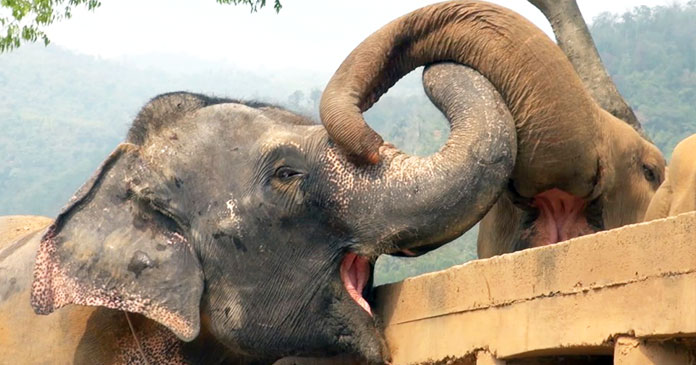 As we know elephants are social beings. They spend a great deal of their time interacting with other members of the herd. They are highly intelligent creatures.

So they displayed their compassion at an elephant sanctuary in Thailand where a rescued elephant received a greet which was never expected by the elephant.

The 30-year-old female named Ploy Thong was rescued from a circus and brought to the Elephant Nature Park in Chiang Mai where she met her new herd for the first time. She was completely blind and had a sorrowful life.

For the past 16 years, Ploy Thong was forced to carry people on her back on the streets of the Pattaya region of Thailand. Before that, she spent her life in a circus.

Thankfully, all these are part of her past and she did not have to worry about them. Her life was going to be changed after her arrival at the sanctuary.

As she arrived in the sanctuary, Ploy Thong started to send low vibrations, in order to let the herd know that she had arrived. The scene after this was very emotional as the entire herd rushed to greet and welcome her.

This shows how sensitive these creatures are. These moments proved that she would be loved and protected for the rest of her life.

According to the Save Elephant Foundation, she was blind from both her eyes and she had to transport tourists every day. Early in the morning, she was saddled and she carried riders until the sunset. She used to sniff the way while the tourists rode on her back.

But now her happy journey began. She knew that she was in a place where she would be loved and cared for. She had never experienced love and care before.