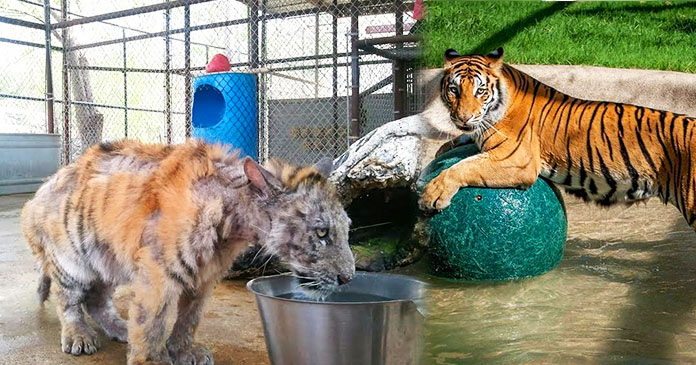 Sometimes the innocent animals have to undergo so much pain just to satisfy the monetary gains of the humans. They are not even given the necessary treatment required and are neglected considerably.

Here is the sad story of a Bengal tiger named Asha but in the end, she turned out to be a survivor. When she was just 9 months old her weight was only 30 pounds and it was very less.

Vicky Keahey who is the founder of Texas’ In-Sync Exotics Wildlife Rescue and Educational Center was really concerned about the health of Asha and wanted her to be transferred into Keahey’s care. Keahey was really worried about Asha that why she was so underweight.

But as she tried to find out the reason she came across a very sad story that depicts how poorly she was treated. She belonged to a traveling circus and she shared her cage with a big tiger who would treat her very badly by picking on her.

Further investigation has found that animals at the circus are not properly treated and so Keahey decided to take Asha in and found out what plagued the cub was ringworm.

She was having bald spots on her body and her skin was dry and it was bleeding. Not only this she was also troubled by open wounds which were given to the cub by the bites from the larger tiger with whom she shared the cage.

After this Asha was taken to the veterinarian who confirmed Asha’s ringworm and she was shifted to an isolated enclosure at In-Sync Exotics. There she was looked after well as she received a medicated bath daily and Keahey did everything possible to make her well.

After 8 weeks of treatment, she was going to be her normal self as fuzz started coming back to the bald spots. At the end of the treatment, Asha started loving water so much that they have to put a small tub in her enclosure.

Now she was bigger and healthier thanks to all the efforts made by Keahey. She even started mixing with other tigers. Her recovery from a sickly tiger cub to a confident adult tiger is very good. We wish her all the happiness.