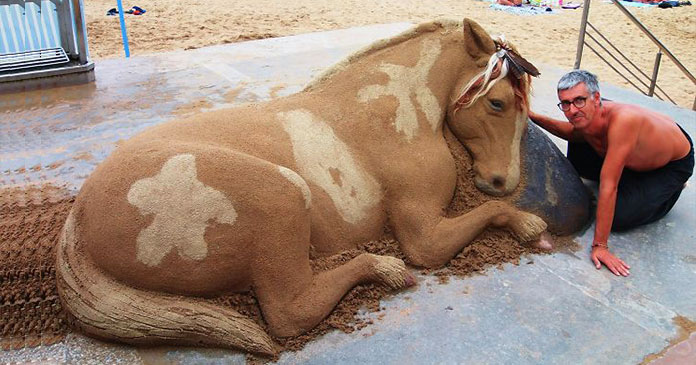 For an artist, everything is a medium. For most of us, the trip to the beach is to have fun and enjoy the sun. But for Andoni Bastarrika it means something special. It is meant to express his art. The sand at the beach is not just the sand but the way by which he creates something new.

The work of Andoni Bastarrika is very ambitious and it revolves around the natural world. Though it is not his job neither his studies, he has a passion for sand carving.

He discovered this natural talent in the summer of 2010 when he went on a beach with his two girls and the first sculpture he made was a little mermaid. At that time, he came to know that he had that ‘fluidity’ in his hands which makes to make those fantastic sculptures. He said that his hands knew what they were doing and he devoted himself to developing his gift and had spent the last 10 years in grooming it.

He is so talented that his three-dimensional sculptures look very real and people are mistaken that whether are original or not.

The gifted artist wrote on Facebook that the sand fascinated him and that sand always taught if one was willing to learn. He felt that in order to make a sculpture, a large number of sand particles come together, they are hugging each other through humidity so that someone could model their union.

And the artist stepped back the creation remained at the mercy of nature meaning the wind would dry the particles and they lose all their individuality and authenticity.

In fact, he believed that humans should behave like sand and hold each other tightly to create a beautiful world. He felt the reason he chose to select animal sculptures as well is that animals are free spirits. He felt that animals are not only unique and beautiful but bearers of great wisdom as well. 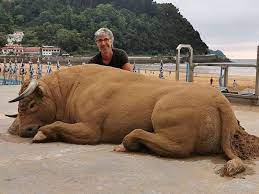 He felt that humans should learn from animals. He felt that the animals had nudity which they keep until their death. That nudity symbolizes freedom.

Humans overdress to survive in a lot of ways. He said that he had never made an animal with a necklace or chains. He embraced their freedom, power, and wisdom through beauty rather than a form of suffering.

Really he is a great artist who works from his heart.