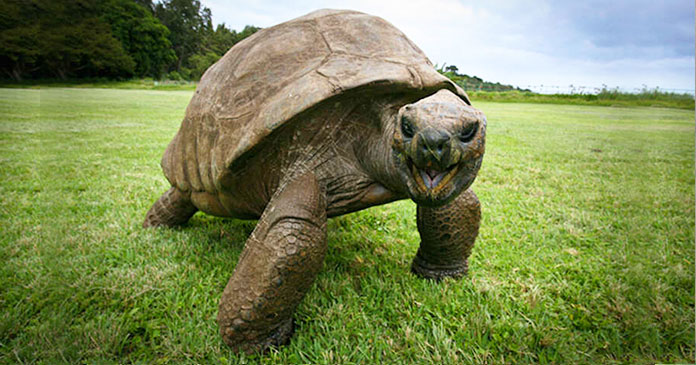 It is a fact that tortoises have the longest life inland animals in the world. On average, they can live 80-150 years. So here we are going to introduce you to the oldest tortoise on the land.

Meet Jonathan who just tiny hatching in 1832. At that time the world was very different. So many inventions were yet to be made like lightbulbs and cars. 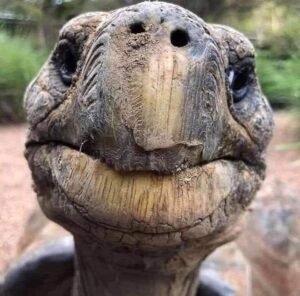 But Jonathan lived to see everything. He is a Seychelles giant tortoise and now around 189 years, he is the oldest known animal in the world. He is having a very relaxed life on the remote island of St. Helena in the South Atlantic. He has been there since the late 1880s.

His main caretaker, Teeny Lucy is the chairperson for the local SPCA. She and several others visit with him throughout the week with fresh veggies. Jonathan lives on the lush grounds of the historic governor’s mansion.

According to Lucy, Jonathan is an icon there.  He is a grand old gentleman who has witnessed everything. He came on St.Helena in 1882 and at that time, he was a fully grown, adult. At this age, he has seen generations of people coming and going. 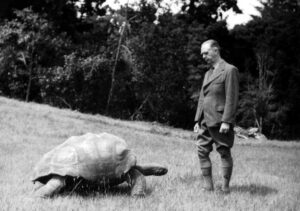 Everyone is surprised by the longevity of Jonathan. According to Lucy, he is the oldest member of his companions at the mansion. His companions are the other three giant tortoises and the second oldest tortoise is his friend, 82-year-old David.

At this age, Jonathan spends his days lounging in the sun, eating the grass, and relaxing with his tortoise friends. It is a very calm life for him. Jonathan is now fully blind but he still finds his way.

Jonathan is so popular that his portrait is even on the back of the small island’s five pence coin. According to Lucy, being the oldest land animal in the world, he has almost royal status there. He is very dignified and interacts in a friendly way if people move slowly around him. All are very much fond of him. 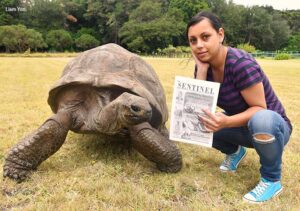 Jonathan suffered some health issues some years back but a change in diet helped and he is fit as a fiddle now. He has seen many caretakers and he appreciates all of them. Lucy said that he recognizes her voice and the vet’s voice and reacts by walking towards them.

We really want Jonathan to enjoy his life.