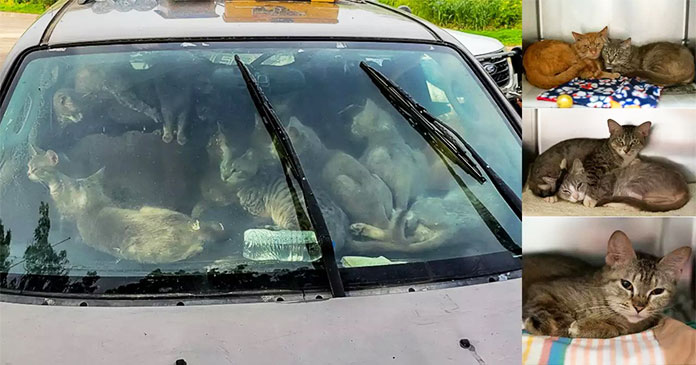 It breaks one’s heart to think about the horrible conditions in which some animals have to live. If you own a pet,it is your responsibility to look after the pet. It is the responsibility of the owner to care for them and provide them with all the necessities .

A very shocking case came to light recently when 47 cats will rescued from a hoarding situation by the Animal Humane Society. It also involved their homeless owner. As per the reports there were around 4 dozen cats which were leaving with their honour in a when in Minnesota.

From the number of the cats it appears that they were so many cats for one person to look after and as a result the cats they suffered. The cat suffered due to stifling heat of June. They were having no home ,no air conditioning to provide them any relief so this suffered in the humidity.

But it was not the intention of the owner to harm the cats. Hi himself was struggling as he was a homeless person who was living out in his van and he was not having anyone to help him. Luckily all the 47 cats are now in safe hands and they were taken out from that van and are provided with the required care.

According to AHS, the cats are properly examined by the expert veterinarians and they are provided the vaccinations, balance nutrition specialized behavior rehabilitation and neuter surgery. The cats belong to different age groups ranging from one year to 12 years old. In spite of the fact that they were put in the hot and unsanitary conditions but they were able to live through that.

According to AHS all the cats were in good health though they were dehydrated. Even the owner of the cats was given care and assessed by the paramedics and he was even provided with medical care. The cats will receive the medical attention for some days and after they are fully treated ,they will be put up for adoption.

At present the cats are enjoying the comfort and space which they have never experienced before.
It seems like a Happy ending to a sad story. Even the homeless man should be provided with some help and care. It is a huge relief that the 47 cats are now on the way to better lives.