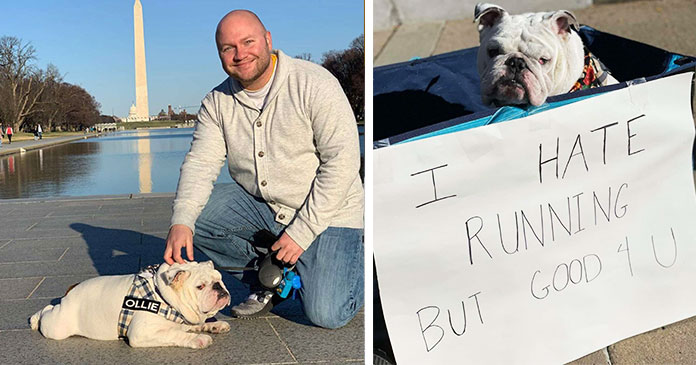 Some dogs are very lazy and they are not very fond of physical activities. Like this dog who did not like going out and doing exercise.

Ollie just turned 6 years and at this age, he knows what he likes and what he does not like. He is very fond of getting attention from strangers and eating snacks. But he really does not like doing exercise. 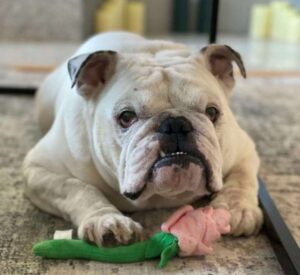 According to Ollie’s mom Crystal Uvalle, in general, he had to be forced to go out, and sometimes they had to drag him for walks, but he loved going for car rides and he knows the difference between the two.

Ollie is so much against walking that his parents would carry his wagon with them as he would not walk long distances and then they had to carry him around. Uvalle says that if it was hot, he would limp and the one had to carry his 48-pound potato body.

Recently, his parents’ friends were running in the Great Race in Pittsburgh which was run a 5K/10K to support amyloidosis research. As the race was organized in the neighborhood, they took Ollie with them. Ollie went there with the sign which was inspired by a famous Olivia Rodrigo song that told everyone how he felt about doing exercise. 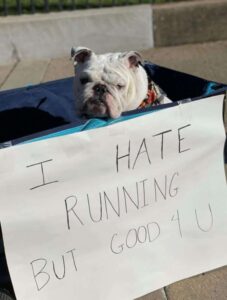 Ollie very proudly sat in his wagon showing his sign and watching the people who were participating in the race. But he was a little upset as no one paid attention to him.

According to Uvalle, he liked getting attention from the people and on that day nobody paid attention and he was a little upset about it.

After everyone has finished running, they came and started patting him. He really liked it a lot.