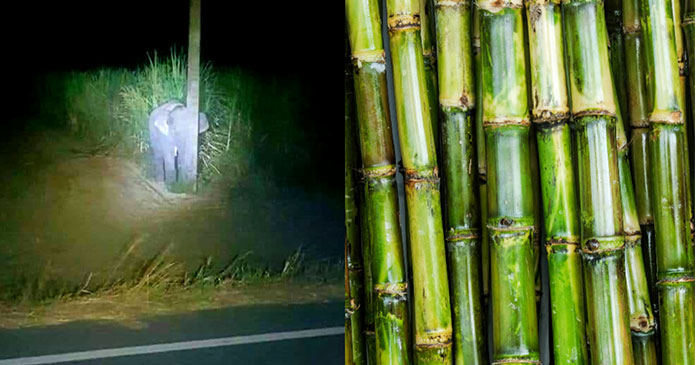 The mischievous baby elephant’s efforts to hide himself behind the pole are actually very funny and cute. While some people made fun, saying that all babies are the same and others said that they believe that if they can’t see something, they become invisible.

The baby was caught by the locals as it was helping himself with a sugary midnight snack. There are around 2000 elephants in the wild in Thailand. So the elephants feeding on sugarcane is not a big deal.

One such incident happened in Chiang Mai that lies in the north of the country where a baby elephant decided to feed on sugarcane at night and saw someone approaching and in order to escape being caught did the funniest thing.

He hid himself behind the pole which is very thin and the pole was not able to cover the baby but the baby thought he was invisible.

The baby elephant’s this act is melting hearts online. Everybody is loving the baby for its innocence. Chiang Mai is a mountainous region located in northern Thailand. In Asia, the sight of the elephants roaming freely is considered iconic.

As these gentle giants are facing the threat of extinction, great measures are being taken to safeguard them and protect them. Many steps have been taken for the peaceful coexistence of elephants and humans.

Though there is a long way to consider that it can be successful yet it is important to know that great progress has been made.

It is to be noted that in Thailand, elephants are the country’s major tourist attraction. So both of them are helpful to each other. So this peaceful coexistence means that elephants felt confident to steal crops.
We wish that this coexistence should continue.