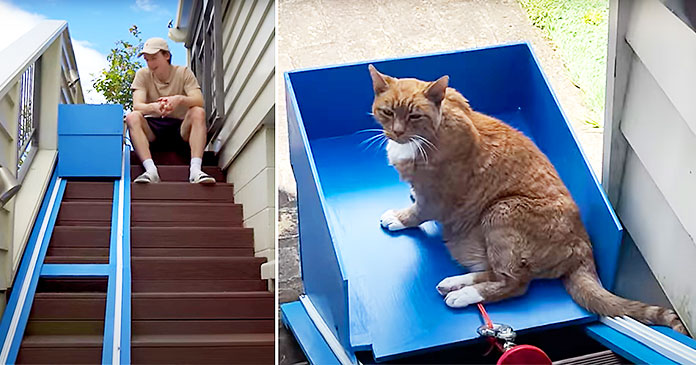 Pets are like family. When a family member gets older and wants to be looked after in the same way a pet gets older, it is very important to look after them.

As they grow old, they find it difficult to move around. But some pet owners are ready to do anything to make sure that their pets still get to live life to the fullest.

People come with many creative ideas to make life easier for their pets like there are special ramps to mobile beds for hitting the beach.

One YouTuber when he found that his cat has grown senior and could not move up and down the stairs, he built a homemade elevator all to make things easier for his beloved senior cat. 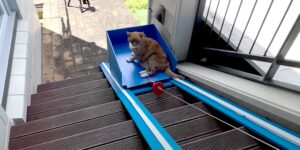 The name of the Youtuber is Liam Thompson and he is from New Zealand. He has around 1.86 million subscribers to his channel and he does “stupid stuff on camera”. He made unusual things like a robot butler and a cardboard submarine.

Recently he made a video in which he is seen making an elevator for his aging cat. It is really heartwarming to know that he cares a lot for his cat.

The name of the cat is Frodo and he is nearly 20 years old which means he is very much a senior citizen in cat years. So it is very difficult for the cat to get around. 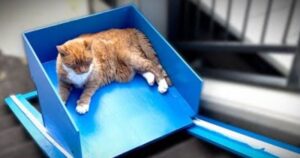 Old age has its own limitations, so Frodo found it difficult to walk down the stairs to get to the backyard deck where he lays in the sun. So in order to make it easy for Frodo to move easily, Liam decided to build an elevator to take him up and down the stairs.

He used a cat-sized cart that can slide up and down a rail like a roller coaster. The video shows Liam hard at work on the construction of the elevator and testing it. As the elevator worked smoothly, Liam said that he spent the next few days working on its safety and painting it to make it more appealing.

Then it was Frodo to go for a ride. The cat was taken downstairs where the cat heads off to his favorite sun spot and then returns to the elevator which takes him right back upstairs.

Really it is quite an innovative idea to help the aging cat. With the elevator, life has become easier for the senior cat.