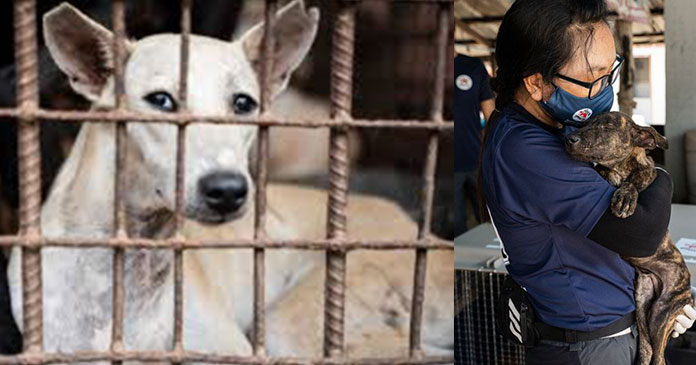 Dogs are the most loved pets all over the world. So when we hear about the dogs being slaughtered, we feel very bad.

But the inhumane trade of dog meat continues in many countries of the world. Not only that, dogs are kept in terrible conditions in those slaughterhouses.

Many animal lovers are working very hard to rescue the dogs from such horrific slaughterhouses. Earlier a truck carrying 61 dogs to slaughter was rescued, now the rescuers have achieved another great victory: a Cambodian dog slaughterhouse is shut down now.

This Cambodian slaughterhouse was opened in 1995 and so far killed a million dogs. During the peak times, this slaughterhouse boasted of killing 200 dogs a day, including puppies.

The dogs were subjected to slow death in drowning tanks. Cages of the dogs were lowered in the water pool and after all the dogs had died due to drowning, the cages were pulled up.

The rescue team had rescued the 16 dogs found at the slaughterhouse. It was a horrific sight there as they discovered two cement water tanks and they quickly came to the conclusion that those water tanks were used for the mass killing of the dogs.