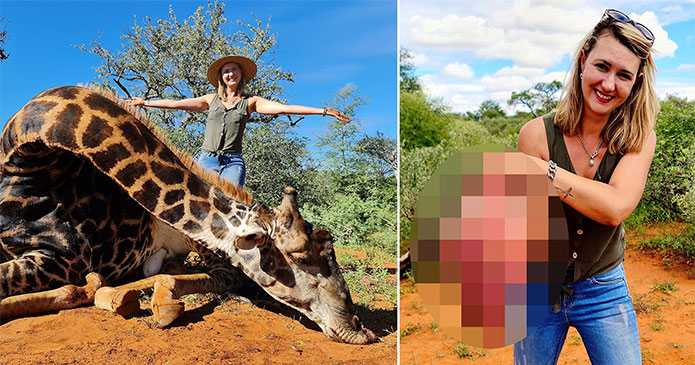 ‘ Ever wondered how big a giraffe’s heart is? ” Merelize Van Der Merwe wrote. She even said that she was absolutely over the moon with her Big valentine present.

This is how Marelize Van Der Merwe, a South African farm owner, and a proud trophy hunter expressed her happiness after she shot and killed an old giraffe during a trophy hunting trip.

She even posted some of the photos on her Facebook page where she was seen clutching the bloodied organ. She said that she had been waiting to hunt a big giraffe bull since 2016. She praised her husband to help her dream come true for about$2,100.

Merelize Van Der Merwe began hunting at the age of five and so far she has murdered lions, leopards, and elephants. She takes pride in telling about the number of animals she killed which is around 500. For the past some time she has been looking for an old giraffe to add to her list. She feels happy that her wish was fulfilled on Valentine’s day.

Describing the 17-year-old giraffe, she killed, she said that she couldn’t believe her eyes as it was big black and old. The boastful hunter plans to use the skin of the giraffe as a rug. She said that it was a perfect bull and she liked the skin.

Though she brags about her achievement it didn’t go down well with the animal lovers. She received a lot of flak for posting the pictures with the heart of the animal and celebrating it as a valentine’s gift. This act of hers is highly criticized by PETA and they described it as disgraceful.

According to them, someone who kills animals cuts out their hearts and boasts about it is a sociopath. They even said that trophy hunting would be listed as a sign of a psychiatric disorder.