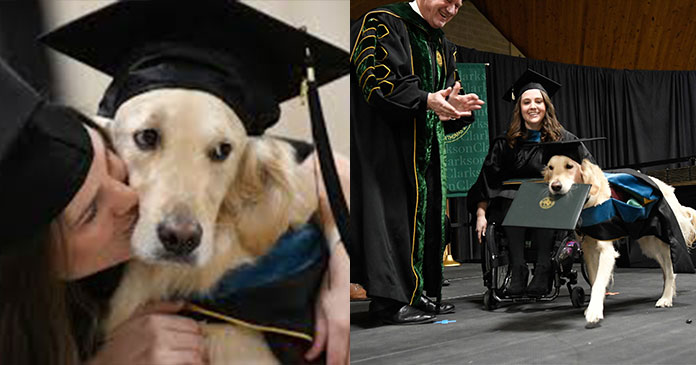 Service dogs are the dogs that are trained to assist and help people with disabilities. They provide good companionship to people who need them. They not only provide medical and emotional help, but they are also loyal pets. So when one loyal service dog remained by the side of the human through grad school, the university decided to honor him.

Brittany Hawley, from Wilson, North Carolina, suffers from a disease called complex regional pain syndrome and uses a wheelchair. She received the services of a service dog through the paws4prison program. The dog was of great help to Brittany. Whenever she went to her class, the service dog Griffin was there.

If she needed anything, Griffin made sure that she got it. Even when she was doing her internship, Griffin was there to help her. According to Brittany, Griffin is very special. Some dogs were afraid of the wheelchair but Griffin was not.

Griffin came into her life at that time when she was about to start on an exciting new journey. She was going to attend Clarkson University to get a master’s degree. The dog proved to be very helpful. He helped Brittany in a number of ways like opening doors. Not only that he became a comforting friend during times of anxiety and depression.

So the board of trustees of the Potsdam, New York, the school honored the 4year old golden retriever. According to them, he showed extraordinary effort, steadfast commitment, and diligent dedication to the well-being and student success. When Hawley received her master’s degree in occupational therapy from Clarkson University, Griffin had an honorary diploma of his own. He definitely deserved the degree.