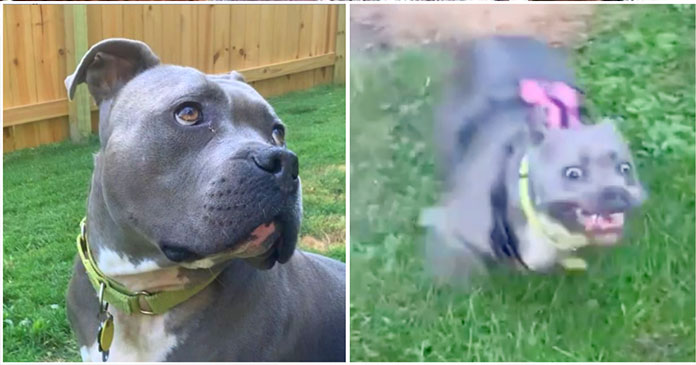 You don’t know how much favor you do to an animal when you rescue it. Going from a shelter to a new home completely changed their life and they often find happiness in the little things like when they get their own toys or their own bed, the happiness they experience is limitless.

For one rescued Pitbull the best thing that she ever experienced was that she got her own backyard for the first time. The name of the Pitbull is Mia and she was found as a stray in very poor health in Ohio after that she was taken in by a shelter and adopted by Taylor Clapp last year.

After getting a new house Mia has adjusted very well. Though she is a very lazy dog sometimes she will be eager to play and get the zoomies, which means she just burst into energy.

According to her owner, she is very affectionate and her favorite game is tug of war. Though Mia had a lot of energy yet she could not roam around in the backyard. The reason being that it had no fence so she could only run around tethered to the leash.

Looking at the eagerness of Mia, the owners decided that they should have the fence around the yard. Mia watched her owners building the fence and after five months when she came home, she was completely thrilled.

As Mia was a stray and then remained in the shelter, she really appreciated the newfound freedom to run around and play in her own space.  How adorable is it to see the Pitbull enjoy this freedom?