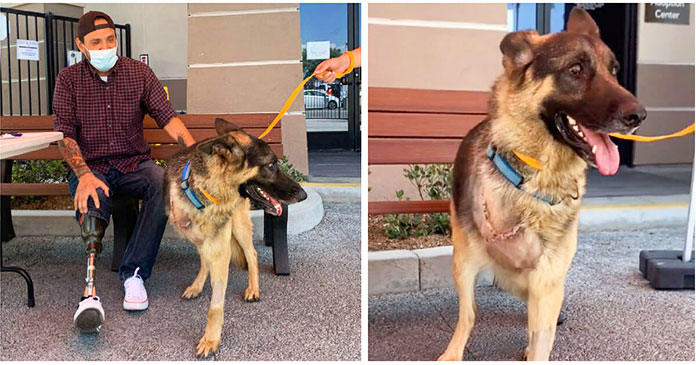 All dogs are special and they need a happy forever home. Dogs with special needs really have to be looked after. They need the most love and also the special human who understands them.

Sometimes, these dogs just find the human they deserve and who is like them. The same thing happened recently when a veteran with an amputated leg adopted a dog who too had lost a leg. 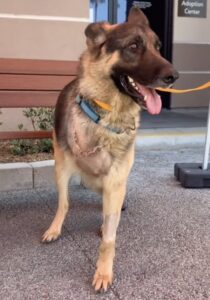 The dog was stray. The name of the German Shepherd was Kane and it was struck by a car that fractured his right leg. When he arrived at Inland Valley Humane Society, in Pomona, California, his leg had to be amputated.

But the loss of one leg did not dampen his spirits. He still runs like he has all four legs. So Kane was put up for adoption. But it is really very difficult to find a home for a differently-abled dog. They are normally neglected in favor of normal dogs at the shelter. 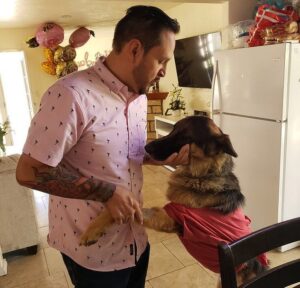 But that was not the case when Dane Orozco visited the shelter. He was looking for a new pet and immediately knew that Kane was the perfect dog for him. They share something in common and that was they lost their right legs.

According to Inland Valley Humane Society, Dane was a veteran who lost his leg during his deployment. The reason why he was looking for a pet was to cheer him up.

Dane himself said that he dealt with a lot of depression so his boss asked him what he liked and what would make him happy. Dane said that he told his boss that he always owned a dog and now he did not have one. 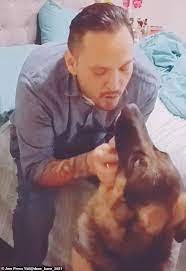 Dane further said that the moment he saw Kane standing on three legs, he fell in love with him. He felt an instant connection with him. He understood the feelings of the dog. So he decided to get him.

The Humane Society was really happy that Kane found such a nice home. Dane takes him to his work and they both are happy together.

Really it is a match made in heaven. How wonderful is it that Dane and Kane found each other.