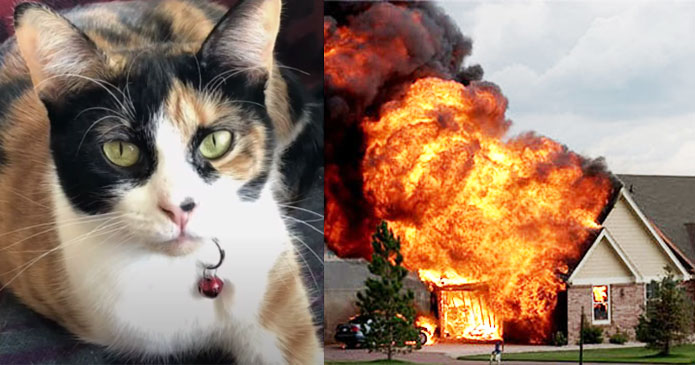 Cats have an extremely sharp sense of smell which helps them to sniff minor scents which we can not pick.
This power of sniffing helped a cat to save her family. The name of the heroic cat is Lilly who lives with her family in Lake Oswego in Oregon.

One day the cat was playing with her owner Sandi Martin when she went towards a gas fireplace and started sniffing the valve. According to her owner, it was something strange for Lilly to behave like that. So Sandi herself went to see the spot and found that there was a gas leak.

The smell was very faint that it would have gone undetected but Lilly who got a strong sense of smell was quick to catch it. Then Sandi’s husband also sniffed the leakage and they called their gas company for help. They advised them to turn off all electronics and open the doors to get fresh air inside.

After 20 minutes the emergency gas company worker arrived and told them that they had a very serious gas leakage. If it were not detected on time, it would have led to a serious explosion.

Had the cat not alerted her family to the leak, it would have caused the fire which could have seriously injured or killed them.It is to be noted that Sandi Martin and her husband adopted their cat over the Christmas holidays, in order to cheer them up and give them company as they were away from their children due to pandemic.

Lilly has returned the favor of her family by rescuing them. What a smart cat she is.