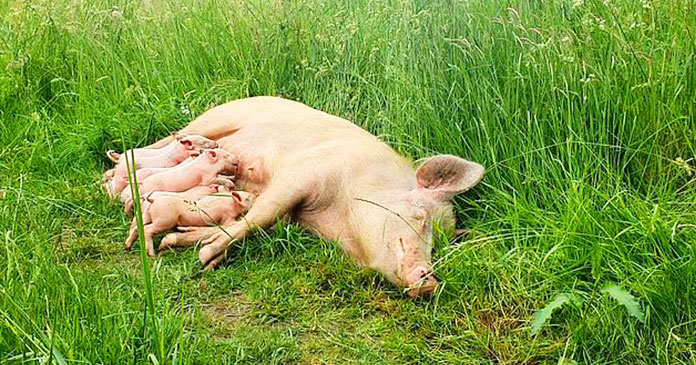 It is true that a mother’s love is universal. It does not matter whether you are an animal or human, we love our babies and want to keep them safe no matter what.

The same is true here in this case. A pig named Matilda proved that a mother’s love knows no bounds. As she was born on a factory farm, this pregnant pig knew what will be the fate of her babies. The normal age of pigs is between 15 to 20 years, but the farmer did not keep her babies for breeding, they would not last past six months.

The mother in her forced her to run away from the farm and find a safe place to give birth to her babies and she did. She gave birth to nine babies. Matilda was spotted by a dog walker in a wooded area in Ollerton, Nottingham, England. 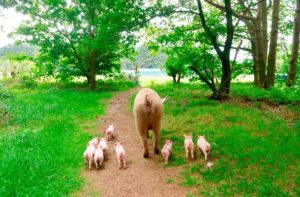 She was surprised to see the beautiful family in the wild and called Jon Beresford and Beth Hewis who are the cofounders of Brinsley Animal Rescue, for help.

Beresford informed that they checked the family as they got the call and found out that the pig had escaped from a nearby pig farm and gave birth to the babies in the woods. Her babies were fine but she looked thin as she had a ring through her nose.

Keeping Matilda safe was not going to be an easy task as they needed the consent of her owners before taking them from there. They found it difficult to collect contact information regarding Matilda’s owners. So in order to find about her owners, they launched a public campaign to save Matilda. 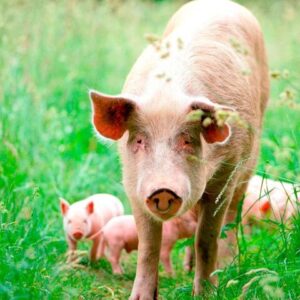 This story of the amazing mom went viral and her rescuers were confident that they would be able to free Matilda and her family. After this story appeared on every National paper of the UK, the company contacted them and they wanted to know the location of Matilda in order to check her over.

At last, Matilda and her babies were free and now living comfortably at Brinsley Animal Rescue. Matilda is a very good mom and she is also very friendly and she feeds and sleeps.

As pigs are highly social animals, Matilda and her four piglets will live the rest of their days at Surge Sanctuary and other piglets will be rehomed in pairs.

For now, they are enjoying their hard-earned freedom. We are happy that they are really having the best life.