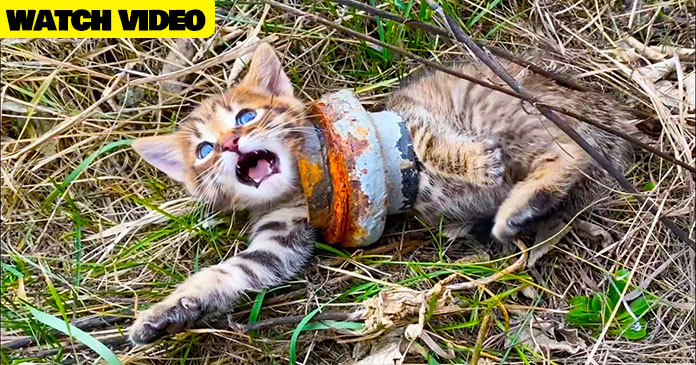 Sometimes if the help comes in time, animals are saved but if by I’ll fate, help doesn’t reach on time, they suffer misfortune. Here I will relate a story of the rescue of a poor kitten who only God knows how got stuck in an iron pipe in a remote area.

Thankfully a passerby was led to the kitten by the painful cries of the tiny kitty. When the passerby came to the site, it was very pitiable. The kitten was stuck in an iron pipe with one paw trapped and the whole thing was around the neck of the little thing. The pipe was so heavy that the kitten was unable to stand on her limbs.

The passerby with a camera in his hand slowly tried to push the metal of the kitten. Though it took only a few minutes to get the kitten free yet looking at the plight of the kitten it seemed long. The passerby even noticed a cat nearby which appeared to be the mother of the kitten

After freeing the little furball as the passerby tried to move away from the kitten, the little one followed him in order to show gratitude. The little kitten chasing its rescuer is very adorable.
Watch the video to see how the little kitten is rescued.