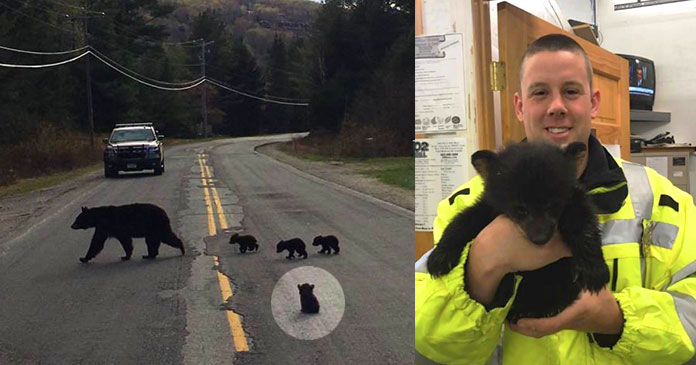 It is very normal to get frightened by a bear. Mostly bear avoid people and never try to approach a bear especially if it is near the cubs. Bears may act aggressively when they are with their babies. But this police officer risked his life to rescue a bear who was in deep trouble. This kind of police officer saved the life of the little bear.

Thomas Owens is a State Trooper who works for the Town of Caroll Police Department. As he is a New Hampshire’s officer, he has seen many bears over the years.  The New England state is home to nearly 5000 bears. So he is very familiar with bears and knows how to react when came face to face with this wild beast. 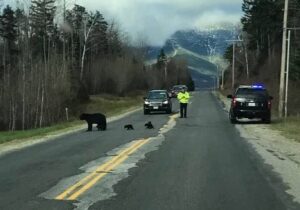 He was on patrol when he saw the bear family. As they were crossing the road, he stopped his car to allow them to cross safely. But mother bear and the three cubs kept returning and then crossing again. He soon realized that the reason was another cub. Her fourth cub was unable to keep up with the family.

Officer kept waiting on the road but the mother bear and the three cubs went into the bushes, leaving the cub behind. The officer wanted to help the poor cub and he stepped out of his vehicle. He approached the bear and remained by his side. Then he called the New Hampshire Fish and Wildlife for help.

He was aware of the danger as the mother bear could return at any moment and there was a possible threat to his life but he did not care. Soon the help arrived and the rescue team from Fish and Wildlife even discovered a 5th cub which was also sick. 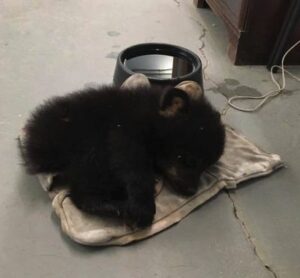