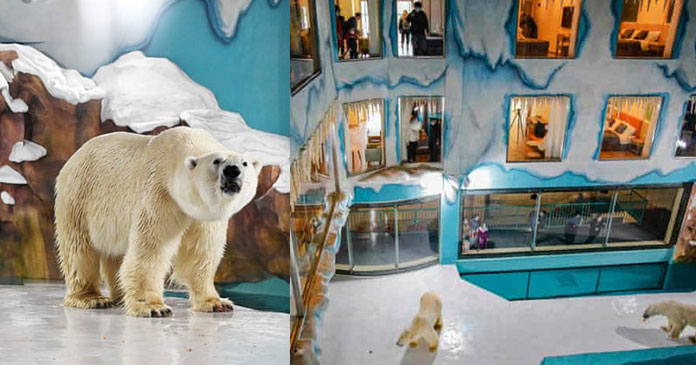 China has opened the world’s first polar bear hotel. It is built around a central polar bear enclosure for guests to view the polar bears from the bedroom.
Since its opening, it has been highly criticized by animal lovers and conservationists.

Its bedroom windows are facing the polar bear enclosure so the guests can watch the polar bear during their stay in the hotel. The polar bear is under the lights which are not good for them. They are having fake rocks, two poles and a floor painted white.

PETA has urged people to stay away from this type of hotel or any other establishment which earns profit from the misery of the animals. According to the PETA, polar bears belonged to the Arctic and not in zoos and definitely not in hotels. This aquarium industry is greedy and exploitative and it is built on the sufferings of the animals.

In the hotel, the guests are informed that they are neighbors of the bears 24/7 during their stay in a $15 million hotel. Yang Liu who is a spokesperson of Harbin Polarland told that the indoor pen is only some part. It is not the total enclosure. Whenever the temperature and air permit, the animals are sent out. The room price of the hotel rooms ranges from$290.10 to$351.56 per night and it is quite high. The rooms are booked through a trial period.

Polar bears are active nearly 18 hours a day and roam around thousands of miles which is their real life.

Earlier also a polar bear named Pizza was seen lying on her side in a glass-walled enclosure in a shopping mall in Guangzhou, a city in China. It has caused a great uproar in 2016.

People should stop using animals for their entertainment. They belong to the wild, keep them in the wild.